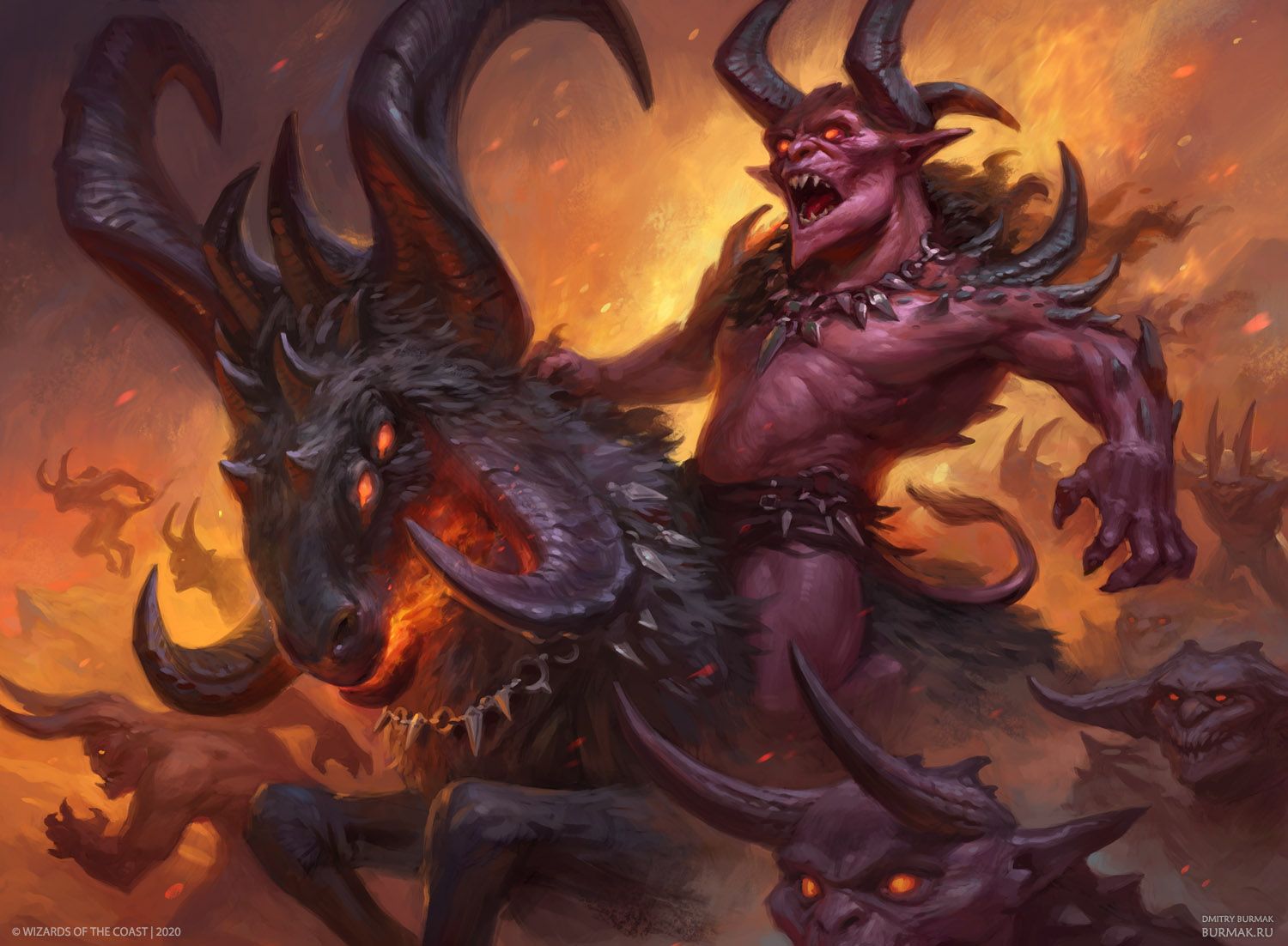 Hello and welcome back to another edition of Ultra Budget Brews, the monthly series that builds entire EDH decks containing no card that costs more than $1 (commander excluded). It's been a minute since we had an honest-to-goodness poll for you all to vote on, so let's get right in to it. 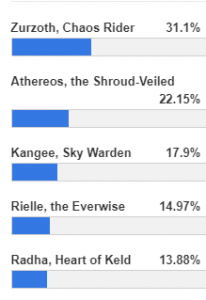 It seems we have continued a long-held UBB tradition of eschewing popular, arguably more powerful commanders for the underbuilt and underappreciated. You all are my people and I wouldn't have it any other way. Admittedly, Zurzoth is a bit more popular than I expected, but I'm going to chalk that up to Devil tribal lacking any other real options and there being a bit of pent-up demand for the shenanigans involved.

In Magic, Devils are chaotic, bordering on zany, tricksters that just want to watch the world burn, and Zurzoth encapsulates these ideals perfectly. They encourage wanton aggression, and they seem to help our opponents have fun by drawing cards, but with a cost of random discard. We will want to be aggressive, hoping to end the game before our opponents can get their feet under them. Let's see what our deck looks like!

Because of Zurzoth's card draw ability, we are leaning in to Devil tribal. Devil tribal doesn't have a plethora of options, so there are some more questionable cards included that might not normally see play. Vengeful Devil, Havoc Jester, and Tibalt's Rager are typically too low-impact for your average Commander deck, but they work great here.

Zurzoth encapsulates modern Magic design by being both the engine and the payoff. As I've mentioned in my series before, this can be problematic if the engine is too easy to get going or the payoff is too high, but thankfully Zurzoth's payoff - making Devils - is fairly tame.

Zurzoth wants our Devils to rumble early and often, and our mana curve reinforces this. Attacking with Devils causes card draw, which begets more Devils, which allows us to attack with more Devils, and this process can be repeated Ad Nauseam. It's a good thing they're so easily replaced, because the Devil tokens created by Zurzoth are 1/1s and will die easily and die often.

Trying to harness the randomness of our discard is a bit difficult. I briefly considered adding a reanimation package, but at that point, we're just playing Feldon of the Third Path with extra steps. I decided to add some Madness cards in to the deck as a way to possibly manage some advantage out of our random discard.

Random discard effects have a smaller possible negative effect on low-to-the-ground aggressive decks. Discarding a land will rarely be the end of the world, as we don't need many to have our deck function, and most of our cards are doing a similar, devilish thing. The opponent playing that combo or control deck, on the other hand, probably needs to hit all of their land drops, wants to keep all of their spells, and, oh, what's that? You kept a greedy hand? Sure would be a shame if something happened to that ramp spell or card draw you were counting on. Enjoy!

Every deck needs ways to ramp, and since this is a mono-red deck, most of that will come in mana rocks, like Guardian Idol, Fire Diamond, and Prismatic Lens. We have less removal than I would typically like, but we are running a few ways to remove problematic permanents, like Mizzium Mortars, Violent Eruption, and Irencrag Pyromancer.

Other than that, this will play like a typical aggro deck. We need to be attacking early and often, but not overextend into a board wipe. This is more of an art than a science, and a lot of knowing the how and when of it is knowing the decks you're playing against or the people you're playing with. One thing that is a bit different than in a typical aggro deck is that we'll want to be attacking everyone for a little damage, as opposed to just one person for a lot, especially at first. Once we've done this a few times, hopefully we'll have a large enough army to K.O. people with cards like Haze of Rage, Scourge Devil, and Mercadia's Downfall (side note: how in the world is this card still under $1?)

While the possible evasion is nice on this, this is included because of the gigantic possible upside from the last ability. Since we're in red, our hand is unlikely to be large, and we can do this reactively. Also, we don't have to stick her and wait for an entire turn to pass before we can use her ability, thanks to her haste. This is an underrated gem.

This, along with big brothers Raid Bombardment and Hellrider, make our swarm of dorks that much more effective, doing direct damage to whoever they're attacking. Guaranteed damage is the exact kind of damage that low-to-the-ground aggressive builds love most.

I'll be honest, I googled "tons of damage gif" and this is what came up. I've watched it probably 20 times and can't stop laughing.

Light Up the Stage

Red may not often get one-shot efficient card draw, like Ponder, Night's Whisper, or Growth Spiral, but I'd argue Light Up the Stage is of a similar caliber, so long as we're able to cast it for it's Spectacle cost. In this deck, that shouldn't be much of an issue, but if we aren't able to for some reason, a temporary red Divination is nothing to be embarrassed about casting.

Though we don't have control of this ability, that downside is a bit offset by how often it happens; triggering when it enters the battlefield and during each of our upkeeps is quite good. While we may not get exactly what we're looking for each time, anything we manage to cast with it is free value, since we cast the instant or sorcery without paying its cost. Typically, if an opponent sees this card, they are unlikely to put anything in the graveyard that we might like, but given the random discard on Zurzoth, they might not have a choice. This card is the definition of low floor/high ceiling, which is a perfect thematic fit in a Devil deck.

This Goblin is just good enough to be allowed in to the Devil club. Devils like dying, and this helps them do so. Sacrifice outlets are fantastic in Commander, and while this one isn't free, it basically draws a card. When possible, save your land drop so that you can play a land if one gets exiled with this.

As always, these are the cards I'd add if I were unconcerned with sticking to a strict budget, wanted to up the power level of the deck, or simply had easy access to a copy.

This is the very first card I'd add in to the deck, which is probably not shocking given its inclusion in 90% of all Zurzoth decks. Zurzoth's attack trigger does an admirable job of making our opponents draw cards, but to maximize the value from it, we need at least three Devils and three opponents that we can profitably attack, or barring that, Devils that we don't mind losing when attacking a well-defended opponent. Temple Bell is great when we're on the back foot, allowing us to get an army going. It's also good when we have Zurzoth going at a decent clip, using it on someone else's turn, which still nets a few Devil tokens.

This card is a stand-in for basically every Wheel of Fortune effect that you can think of. With the exception of Magus of the Wheel, they are literally all too expensive. Wheel of Misfortune, Reforge the Soul, Molten Psyche, everything. I picked Khorvath's Fury because I think it's the most underrated of the crew, working as either a wheel effect or as a burn spell if our opponents have just a bit of life left or if they casually glanced around the battlefield with a Korvold, Fae-Cursed King or Chulane, Teller of Tales in play, drawing an obscene amount of cards.

Descent of the Dragons

I love this card much more than I should. It's not good, per se, but it is a great deal of fun. Attacking with a bunch of Devils and then casting this will likely require our opponents to board wipe or simply die to a terrifying flight of Dragons. It can also double as a weird-psuedo Wrath for our opponents' creatures as well. There may not be a ton of times we want to replace our opponents' creatures with 4/4 fliers, but it'll come up some percentage of the time.

While card draw in red has improved significantly over the past few years, it's still not exactly a strength of the color, and that's something we have to be conscious about adding to our deck. Thankfully, Idol is a perfect fit. We'll likely be making a fair amount of Devil tokens as it is, so we'll be able to use this to help keep our grip full. We won't often use the second mode on this, but sometimes we just need a vanilla 10/10.

Vicious Shadows loves death. It doesn't care who is dying, so long as there is a lot of dying happening. Zurzoth's Devils are tiny, kicking the bucket at the slightest resistance. This is already fine, as Devils often benefit us when they die, but Vicious Shadows turns this up to 11, weaponizing all of the cards our opponents have been drawing by doing damage equal to the cards they have in hand. Yes, this is a seven-mana enchantment, but if we manage to stick it on the field, it's liable to absolutely run away with the game.

What do you think? Is this a deck you'd consider playing or do you prefer your decks to be a bit less random? Did I miss any slam dunk inclusions? Let me know in the comments! Also, below you'll find the poll for next time. Please vote for which legend you'd like to see receive the Ultra Budget treatment. Until next time!