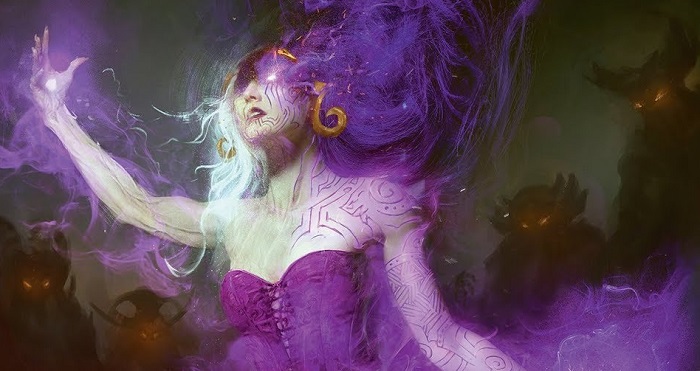 Burning the Table in Demonic Flames!

It feels like it's been so long, but once again, we are reunited, Commander faithful! Welcome to this week’s edition of Uncommonders, the series that explores underappreciated commanders printed at the uncommon level. My name is Seth Cross and if I can tell you a little secret, I would tell you that I am normally not the kind of player that enjoys “chaos” cards. It's therefore going to be awkward when I tell you about the deck today, led by none other than a blast from Magic: the Gathering’s past, the one and only…

Look, I know what you're thinking right now. You're right, the first thought most people get when seeing Boris is not “chaos” deck. If we look at the EDHREC page for Boris, we would see the makings of a Demons and Devil deck, in dual tribal synergy. While that does seem fun for the right table, I've done tribal builds before and I was ultimately uninterested. I briefly considered a Rakdos “punisher” or “group slug” deck with cards like Polluted Bonds and Aether Flash, but then a random thought struck me that hearkened back to the days when I played Dungeons and Dragons:

Naturally, this led me to a crazy idea to build a chaos deck, true to the theme of Demons and demonic energy. Plus, well, chaos decks are evil, so I've that part of the alignment covered, too. In the end, I did include some punisher-style cards, but mainly because they felt “chaotic” and “evil” enough to fit the theme. Of course, some of them just felt evil, and in a deck like this, that's good enough for me. I also threw in a fun, janky wincon into the deck that I've been hoping to pull off for some time now. Let's check it out.

When I think of chaos decks, some of the first cards that come to mind are Possibility Storm, Thieves’ Auction, and my personal pet peeve, Warp World. With a token generator in the command zone, I reluctantly do think Warp World is a good addition to the deck, but the other cards are not necessarily the kind of chaos I want to embrace. I want cards that are going to work more for us than they'll work just randomly for everyone. Thus, my first thoughts were cards like Stolen Strategy and Gamble, and we can't have a chaos deck without Chaos Warp.

Creepy Doll makes for a good blocker that will basically have occasional deathtouch. Boompile and Rakdos, the Showstopper are each wrath effects whose efficacy is dependent on the flip of a coin (or two, or five, or seventeen). Finally, I haven't made a deck recently that felt like a good spot for Chaos Wand despite really enjoying the flavor of the card, so I was happy to slot one in for this deck.

At this point, we should note that many of our cards are dependent on flipping one or more coins, so I included Krark’s Thumb to ensure that the odds are ever in our favor. For the sake of having more ways to get the Thumb into play, I figured a couple more tutors to go with Gamble would be a good idea. Again, for the sake of theme, I chose Diabolic Tutor and Demonic Tutor. Taking further advantage of our commander, who provides us with token bodies, I also added Diabolic Intent because I love my redundancy!

“Group slug” cards deal damage or negatively affect each player in the game. An infamous group slug card is Zo-Zu the Punisher; if someone plays a land, they get “slugged” by taking damage. These kinds of effects can speed the game up, especially if left unchecked. They have some overlap with “punisher” cards, where opponents are forced to choose their terrible fate. Take, for example, the recent Captive Audience, where the chosen player must make horrible decisions once a turn unless they can remove the enchantment. Other good examples include Risk Factor and another pet peeve card of mine, Torment of Hailfire (though that was a little too much of a 'big mana' to fit into this particular deck).

In addition to the cards above, I like Polluted Bonds and Kaervek the Merciless to slug it out with the table in this deck. This is more of a meta call, but if there are many tutors happening in your games, Ob Nixilis, Unshackled can be a great way to balance the scales, while also being another Demon in our nightmare army. Seizan, Perverter of Truth is a unique slug card that sometimes gets left alone because people like the extra card advantage, even when it comes at a price.

Earlier in the article, I mentioned there was a somewhat janky wincon that I have been hoping to pull off. Are you ready for it? Because here it is! We're going to win the game by signing a simple, legal, binding document: a contract!

The Vorthos in me is in love with this card! My only regret is that Griselbrand is banned, so there is no way to ever win a game with a Liliana, Heretical Healer deck that has a Contract in it with her four Demon patrons. Here, we still plan on casting multiple Demons, and we even get an easy one by making the Demon Minion token from Boris. The hardest part will be protecting Contract until our next upkeep, so I ran some tricky cards that might help us pull it off. With Emergence Zone from War of the Spark, we have a one-turn chance to flash the Contract in, but I also ran Vedalken Orrery as a more resilient means of doing it. My greatest joy is flashing Contract in at the end of the turn before ours when we have four Demons on the battlefield and winning the game out of nowhere!

As always, throw in some demonic ramp, diabolic card advantage, and evil Wrath effects, and the deck looks like this:

From Demons to Devils?

The last Uncommonders was based on Danitha Capashen, Paragon and a bunch of other chivalrous equestrian enthusiasts recreating Camelot and the Knights of the Round Table. Folks seemed to love the idea, and several of you pitched so many great ideas about Camelot-like connections that I either completely missed or was unsure of adding in the first place. Some people even had cool ideas for more decks based on different crazy themes! One of those ideas came from George Frey in the comments of the article, who wrote:

I'm curious as to what you can come up with for a "The Golden Army" style deck going with Golem tribal and using cards like Golden Guardian, Golem Foundry, and Titan Forge to make a massive never-ending army.

I am a huge fan of the Hellboy movies, with Hellboy II: The Golden Army being my favorite of the two. I would love to do something like this in the future! Maybe it could even be a series, basing decks around movies, books, etc. Tackling big ones like The Lord of the Rings or maybe even comic books like the Avengers or the X-Men would be both stressful and exciting at the same time!

We are still stomping toward the end of the Uncommonders series. Each article makes me more excited to reach the end of such a huge project and I hope it's been as much for all of you as it has been for me. We're heading back to Dominaria for the next article, and after that we may very well be seeing some more Replacement Commanders! If you enjoy my takes on Magic and Commander and want to discuss in the meantime, feel free to find me on Twitter. You can also see more of my shenanigans via the Praetor Magic YouTube channel, both for videos and weekly streams! And if you want to join our community, head over to the public Praetor Magic Discord server! But until next time, everyone, you know what to do…