Uncommonders - Knights of the Round Table 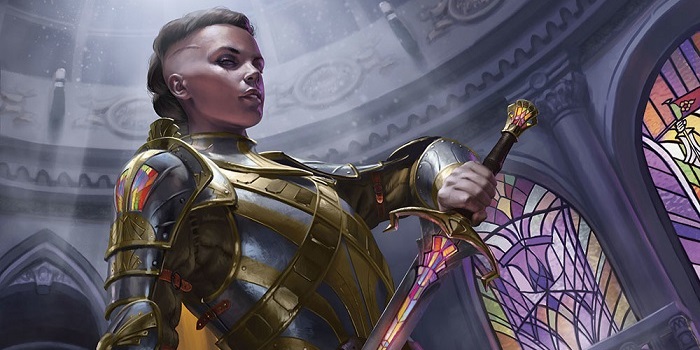 Dominaria, the Camelot of Magic

Hello again, Commander faithful! I know that this is a trying time for Magic: the Gathering players, as we seem to be going from set release to preview season to set release to preview season, but fear not! We will prevail and our favorite decks will, inevitably, be all the stronger for it. My name is Seth Cross and welcome back to Uncommonders, the series that explores underappreciated commanders printed at the uncommon level. There don't seem to be any new uncommon legends in the new Core 2020 set, but fear not! Dominaria is still full of amazing legends to explore. This week we are talking about…

It is rare that I say this about a mono-white commander (or a mono white-card in general) but Danitha is actually a pretty good creature: three mana for a 2/2 body with some very relevant keywords, and a unique ability to discount spells that are very prominent in her color. In all, you get a solid option for the command zone.

I realize that her ability mentions both Auras and Equipment, but we did just look at Boros Auras recently, so I thought for this commander we would focus on the Equipment cards. At first, I just assumed I would make a generic goodstuff white Equipment deck, but then I was struck by an idea, inspired by a couple of cards in the recent set, Modern Horizons, and Danitha’s creature type: she is a Knight!

Danitha and the Knights of the Round Table!

If your first thought just now was "Oh, just another Knight tribal deck," well, you are partially correct, but there's more to this idea than just the tribal element. After all, what is a Knight without their sword? And it just so happens that we got two more members of the "Sword of X and Y" cycle in Modern Horizons. Sword of Sinew and Steel and Sword of Truth and Justice joined the cycle and, for the most part, I am happy with both.

I know some people have expressed concern that these newer Swords are less powerful than the OG cycle, but I personally think these utility abilities are still very good and the colors they protect from (black and red for one, white and blue for the other) are pretty relevant combinations in Commander, from my own personal experience. Like I said, there is a Knight-based theme as well, as I chose six specific Knights to accompany Danitha into the battlefield.

Who’s Sitting at the Table?

I was surprised when I searched for mono-white Knights on Scryfall and found out there were 147 total; there were even a few “lord” abilities to tie the tribe together! I chose the lucky six based on a few different variables, from my personal preference to simple utility. For example, Balan, Wandering Knight was not in the top seven of white Knights, but since we are dealing with Equipment, I think she is a solid choice. Meanwhile, Knight of the White Orchid was the top-rated Knight on Scryfall and was chosen because he does something mono-white normally struggles with: ramping a land if we're behind.

Puresteel Paladin works well with our Equipment deck by making it free to move the Swords into the hands of our heroes, while Thalia’s Lancers can tutor up some of our other Knights and other important cards. I chose Mirran Crusader for the low cost and double protection because if we have a sword that grants protection from white, blue and/or red, we are making Crusader nigh impossible to block. Knight Exemplar is one of the lords that I think the deck will benefit the most from, making our Knights indestructible and slightly stronger.

Of course, fourteen cards do not a deck make, especially when the concept of a tribal deck is based on just seven of those cards. Since the theme of the deck prevented me from simply piling in more value Knights or type-based lords, I decided to go for the theme of “Camelot”-based effects. With Danitha as our head Knight and presumably our Queen, she needed a throne and I found one that gave me access to my favorite mechanic in Commander: the Monarch. Danitha, sit high atop your Throne of the High City.

Danitha’s personal squire, Bastion Protector will keep her safe, while Selfless Squire is looking to earn their knighthood by protecting us. Elspeth, Sun’s Champion is a mini army and board wipe effect that keeps some of our faithful Knights on the field (or all of them if Knight Exemplar is on the battlefield). Any of these squires may need a sword of their own, so Sword of the Animist makes it into the armory. Dawn of Hope can let us sink our mana into making more Soldiers while also synergizing with Danitha, who has lifelink naturally. While we're on the subject of gaining life, do not forget that two of our Swords of X and Y Equipment also have lifegain baked in! In the lore, Danitha does not seem the type to be looking for a husband, but for the sake of theme and synergy, I like the idea of Darien, King of Kjeldor being the “stay at the castle and recruit an army” type of king. Since we are talking about a Camelot-based theme, there was no way I would miss the opportunity to run Quest for the Holy Relic.

Of course, every kingdom needs to collect money to fund roads, the army, and everything else, so Land Tax and Smothering Tithe seemed like natural inclusions. Since the deck is based around creatures, I only ran a few Wrath effects, and I wanted to make them work mostly in our favor. Austere Command and Mass Calcify have the potential to leave us untouched, while I thought of Teferi’s Protection as Merlin’s spell of protection over Camelot, keeping it safe from enemy nations. Lastly, Stonehewer Giant and Stoneforge Mystic are the blacksmiths of our legendary swords while I chose Baird, Steward of Argive as the captain of the guard for our kingdom.

We need some more removal, as much draw as we can manage and some more ramp, but overall this is what the decklist looks like:

Normally, when I sit down to write an article, even if I have the idea already in mind, it can take me a couple of days to research cards and synergies to try to present at least a mid-level deck. I have noticed, however, that when I do these kinds of thematic builds, I tend to almost fall into the decklist. Before I know it, the list is complete, and the article is over, and here we are! I really do think that these kinds of flavorful decks are the most fun for me to brew, and I hope you enjoy them, too!

The last Uncommonders article about Pirates and Ninjas had a comment that stuck out, and per tradition, I'd love to shout it out. It came from /u/UltraWeebMaster on /r/EDH, who wrote:

I have to confess, I have done some odd tribal decks in the past. As a matter of fact, the first episode of the Praetor Magic YouTube series “Magic Online Commander League” was “tribal jank” where I played Selesnya Knights, helmed by Sidar Kondo of Jamuraa, while another player at the table ran Selesnya Archers, helmed by Karametra, God of Harvests. It was honestly one of the worst performances I have had on the channel, but it was a fun time brewing the deck - tribes are just so nuanced and cool.

If you want to see more of my content in video form, make sure you check out and subscribe to the Praetor Magic YouTube channel. We upload videos and stream from there, like our weekly live podcast on Mondays known as Reflections of the Council. We sometimes stream variety games and on Thursdays I stream a budget version of Commander known as “3DH” or “Three Dollar Highlander” where the Magic Online decks are all 3 TIX (which equates to $3) or less. If you are interested in that concept, join the public Praetor Magic server and we have a spreadsheet in the #3DH channel to help you build a deck to play with us! Last, but not least, find me on Twitter where you can keep up with my hustle during preview seasons. I am gearing up some more hype as we are quickly approaching the Commander precon preview season and that means Replacement Commanders for 2019 is coming soon!

In the meantime, remember: Keep dropping bombs (and swinging swords)!