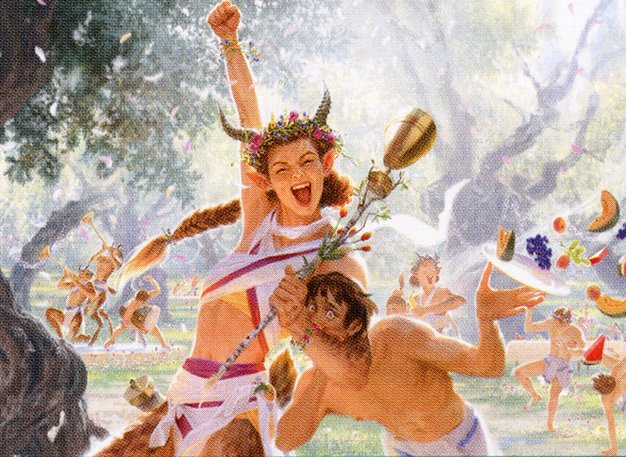 (Gallia of the Endless Dance| Illustrated by Johannes Voss)

Today we're going to build around a very underrated commander from Theros Beyond Death. Given that part of her kit is dedicated to a underdeveloped tribe, she's become basically a tribal commander. That'll stop today, because today we're building a Gallia deck!

Other Satyrs you control get +1/+1 and have haste.

Whenever you attack with three or more creatures, you may discard a card at random. If you do, draw two cards.

Gallia's draw trigger is really powerful. She's in a color combination that has plenty of cheap dorks that can be used to accelerate in the early game and then be used as fodder to her trigger in the late game. The randomness of the discard can easily be mitigated by simply packing our deck with Goodstuff (or even by playing the important stuff in our first main phase)

Gallia is an aggressive commander through and through: she's a cheap body with haste that provides card advantage for us. One way to take advantage of this is by playing with Madness cards to get even more bang for our buck.

Satyr is a tribe that is lacking in terms of card quality. However, given that Gallia also grants haste to other Satyrs, we can experiment with otherwise lackluster creatures in order to help fuel her draw trigger. I would strongly suggest gravitating towards utility-based ones, like Satyr Wayfinder, rather than just going for maximum value.

Madness works great with Gallia, compensating for some of Aggro's shortcomings. However, Madness cards tend to be less effective in EDH.

Like I said in my overview of the commander, Gallia is THE Satyr commander, so it's not surprising to see many Satyr cards in the top slots of the deck. This is a thematic approach, but I think that Satyr tribal fails to take full advantage of Gallia's potential.

From the moment I saw Gallia, I knew I would build around her draw ability. There are basically two main dimensions to build around: the draw, and the discard. Dredge is a good example of a good mechanic to pair with Gallia: when we get dead cards that we want to discard, we can use the draw trigger to Dredge deeper.
To trigger Gallia's triggered ability, we still need a creature suite. Since we're already planning to Dredge around, looters are a perfect fit for this strategy. This leads us into an aggressive deck that invests in creatures with a looting ETB, like Azra Bladeseeker. Bomat Courier, Burning-Tree Vandal, and Reckless Racer might be a bit slower than their ETB counterpart, but the possibility of having multiple triggers more than makes up for this especially since two of them have haste.
Now that we've covered the what and how, we need to answer why we're Dredging. Usually when we think of Dredge, we think of Reanimator. Being in Gruul, Gallia has a tough time returning creatures that she's discarded. That being said, you know what kind of permanent Gruul loves to return? Lands! Dredging up lands and then using cards like Splendid Reclamation is a powerful way to get many Landfall triggers and get ahead in the mana department.
We're also stacking the deck with win conditions. We're mostly using two-card combos to end the game: Splendid Reclamation/World Shaper and Scapeshift are great enablers for our more powerful Landfall triggers, such as Valakut, the Molten Pinnacle, Field of the Dead, and even Moraug, Fury of Akoum. Dark Depths (and, by extension, its other combo pieces) provides a fast clock that can be hard for some lists to handle. Finally, Chandra's Ignition is a great way to close games where multiple opponents are alive with low life; Multani, Yavimaya's Avatar can be used to great effect with Ignition since we can easily get him back to the battlefield, but even Ulvenwald Hydra will do the trick.

Unlike the usual Lands Matter lists, we're heavily invested in mana dorks. We need to have the three attacking creatures mark as soon as possible, and they provide both a body and the mana acceleration to put more bodies into play.

With all the Dredging, we're likely to mill a relevant piece, so we have some powerful recursion pieces that can act as a pseudo-tutors. Recoup is great because it targets big sorcery effects, and it's an easy card to find considering that we can Dredge it. Underworld Breach is versatile, but it needs some setup, and it only works for a turn. Eternal Witness is another body, which isn't that much for the type of effect that we want to recover from our graveyard, but it's still an upside.

For opening hands, we're mostly looking for early creatures to fuel our commander. From there, we can start making a plan according to our draws.

In the early game, our main concern is gathering three bodies to attack. Our commander is usually the third, so it's really more like finding two. While the Dredge suite is nice and all, we don't really need it at this stage of the game. After all, getting to trigger our commander means that we're seeing at least three new cards a turn, which is more than enough to give us a boost.

By the mid-game, between other players building up defenses and playing board wipes, our ability to trigger Gallia significantly diminishes. By this point we hopefully have dug enough to flip the switch and start acting like a more standard Lands Matter deck. This is the stage where we really want to start chaining some of our Dredge cards.

When we get to the late game, our priority is to find any of our win conditions, we have plenty of opportunities to find any of them, especially with our Flashback recursion spells. Finding the most effective winning line is fairly easy, cards like Cavalier of Flame and Chandra's Ignition are great at bursting people out, while Field of the Dead and Omnath, Locust of Rage are great at grinding.

The list is basically a Lands Matter with a twist. This twist costs us some precious deck slots that we have to sacrifice in order to fit some of the other cards. One of the biggest problem that I see that this list suffers is that the only way it can effectively "tutor" for lands is to put them in the graveyard, unlike most decks that tend to use ramp effects like Cultivate.

Enablers, like Manabond, can be great in a list like this, as it's a way to consistently drop Dredge cards out of our hand. However, as mentioned before, we lack the land-pulling capabilities to make it that much better than an Exploration.
Chandra, Flamecaller is a great card to cycle through bad hands and letting us get rid of some Dredgers. It may seem like an expensive investment, but the combination of Gallia and Chandra is a powerful draw engine.

Harvest Season is a bit of a risky card, but if we are able to play it with two creatures on the field it's more effective than Cultivate.