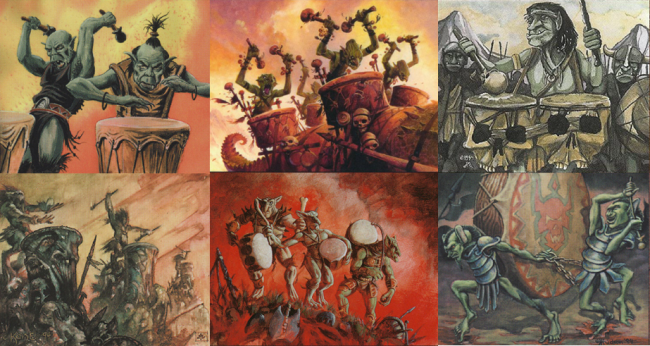 You and What Army?

Greetings sleuths, saboteurs, skulkers! Welcome to another installment of Evasive Maneuvers, where we examine keywords and strategies that help get our creatures through during combat.

This week we'll be taking a look at menace (or ”Menache” according to Jimmy Wong). Originating from a pointy-eared percussion party pretending to be Neil Pert during a jam sesh (Goblin War Drums), menace has been around since Fallen Empires but was officially introduced as a keyword in Magic Origins (and did you know: you have seven different art/border options for the card, four of which are all from the same set!). To be fair, a swarm of drums can be quite menacing — think of poor Ori, whose last words were written about the very terrors of sonic doom as Orcs stormed the last chambers of Moria:

The end comes soon. We hear drums, drums in the deep. They are coming.

A creature with menace cannot be blocked except by two or more creatures. From a flavor standpoint, menace is fantastically designed. Invoking some sense of threatening imposition, it makes sense that no one living blocker would want to stand alone. Only in the presence of fellow company might you find courage to stand up against such a menacing foe.

Menace was granted keyword status in Magic Origins in part to help phase out Intimidate, which was deemed problematic from a design perspective. As of now (11/15/2020), there are 171 Commander-legal cards that have or grant menace. The color breakdown is as follows: 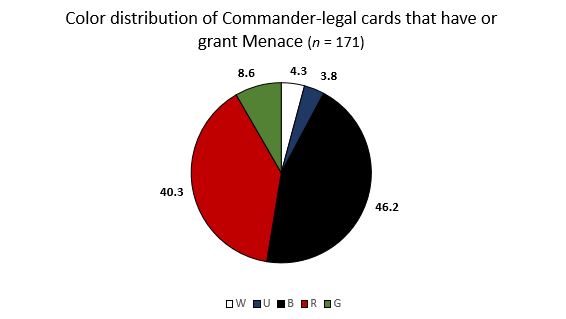 Predominately found in the Cult of Rakdos, menace makes perfect sense given how terrifying some Rakdos parties can get (see Captive Audience). However, don't sleep on menace cards in other colors, like Gruul War Chant or Gleaming Overseer!

So how do we evaluate the effectiveness of menace? It's a bit trickier than some of our previous installments, as there's simply no way of knowing how many creatures our opponents will have on board at any given time. Let's start by looking at typical 'go wide' strategies, or strategies that emphasize clogging the board with creatures and thus less likely to be intimidated by our menacing grimaces.

Token-themed decks seek to jam the board with as many pieces of cardboard (or dice) as possible. As of writing this (11/15/2020), there are 6,176 token-themed decks scraped by EDHREC, or 1.45% of total decks scraped. That might not seem like a lot, but be wary: many a deck have incidental means of producing tokens while not being captured by the token 'theme.' You'll notice, for instance, that Krenko, Mob Boss, who commands a staggering 2,476 decks, is nowhere to be found under the red token theme page. Similarly, cards like Talrand, Sky Summoner or his friends Young Pyromancer and Murmuring Mystic can be easily splashed into a spellslinger deck while still clogging the board.

Like missed triggers, you're bound to find some form of tokens in most EDH games.

Tribal decks are likely worth considering in our evaluation of menace, since nearly all tribal decks want to jam the board with more creatures of the same type to reap the benefits of tribal affinity and synergies. Whether its Elves or Goblins, Vampires or even Kavu, generally speaking, the more the merrier when it comes to tribal board states. For us, more creatures means more potential for our foes to band together and be able to block our creature with menace.

Okay, so chances are, many decks want to have multiple creatures out. After all, we aren't seeing a huge preponderance of Homicidal Seclusion (189 decks) or Deadly Wanderings (180 decks) out there. Nevertheless, commanders aren't going to be able to block your menace creature unless they have buddies! That means outside of your occasional Stangg, partners, or Prossh, Skyraider of Kher army-in-a-can variant, most commanders won't be able to block a menace creature so easily. The same goes for Voltron decks, which many times emphasize going 'tall' rather than 'wide.'

Menace requires a meta-consideration, likely more than our previous keywords, but in the right circumstances, I think it's a potent form of evasion, as it literally forces defending players to consider they want to get two-for-one'd per creature with menace.

The Stuff of Nightmares

While I don't want to go so far as to claim making a menace-themed deck was impossible before Ikoria: Lair of Behemoths, it was certainly tricky. I had been toying with the idea of a menace deck for a while, but only after Ikoria was released with some much-needed keyword support did I actually order the cards. What follows is me trying to articulate my thought process and tinkering with my very own menace-themed deck that I have been playing with on vEDH for a few months now.

I originally had Alesha, Who Smiles at Death helm my Rakdos menace list, but have recently been experimenting with Chainer, Nightmare Adept. Trading Alesha's aggressive grin for Chainer's censer of doom highlighted a few perks, namely granting haste to creatures with menace to get damage out of nowhere. The deck still struggled in committing to the board, and most of the time the deck won, it was with a well-timed Tentative Connection to steal something bigger and badder than what I had on board, like an Archfiend of Despair.

But with the release of Commander Legends, everything changed when these two adorable familiars were spoiled: Falthis, Shadowcat Familiar and Kediss, Emberclaw Familiar.

Falthis, Shadowcat Familiar and Kediss, Emberclaw Familiar, alongside their other familiar counterparts, haven't received nearly as much attention as the other 66 legendary creatures in the set.

Paying a total sum of five mana for 3/3 power and toughness doesn't sound great, but having access to two creatures with menace, deathtouch, and a Grenzo's Ruffians damage trigger means that we only need to get through to the one player who can't handle the menace, and still be able to damage that pesky Thalisse, Reverent Medium player. Against three opponents, you're actually getting nine damage for five mana's worth of investment. Menace and deathtouch are a nasty combination, as it forces opponents to decide if they want to lose two creatures (thanks to the menace), since Falthis can just assign one lethal damage point (thanks to the deathtouch) to each blocker.

Finally, their templating happens to synergize with the only spell I could seem to win games with in the previous build iterations: Tentative Connection.

You'll notice that both Falthis and Keddis give their respective bonuses to "Commander creatures you control," not own. This means if we temporarily steal an opponent's commander, it will now have menace, deathtouch, and become a pseudo-Hydra Omnivore.

If opponents had difficulty considering whether to block since our commanders have menace and deathtouch, now they will have to face the fact that their own commander is forcing them to choose between double-blocking and possibly losing all three creatures thanks to the deathtouch from Falthis. If they take the damage, so will everyone else. Threaten effects paired with menace truly helps to curb against the downsides of opponents having multiple blockers by swinging the advantage further in our favor.

Sonorous Howlbonder is an absolute all star in this deck, converting our menacing forces from twofers into threefers(?). Ok, three-for-ones.

Labyrinth Raptor really take menace over the top and adds a fantastic pump effect in a pinch. Yuan Shao, the Indecisive makes our menacing creatures straight unblockable, similar to Vorrac Battlehorns. Yuan Shao is expensive, I know, but feel incredibly privileged that an angelic content creator might have helped me out in acquiring one (you know who you are — and thank you so much!).

Berserkers' Onslaught, Jeska, Thrice Reborn, and Fiery Emancipation help to round out our top-end, making our familiar friends punch above their weight class. The damage will apply between Kediss, Emberclaw Familiar's trigger, meaning if we swing at an opponent with just Kediss and Fiery Emancipation, he will deal 3 damage to the defending player and 9 damage to our other opponents, dealing a total of 21 damage...as a 1/1! With Falthis, she hits the defending player for 6 damage and 18 to the other players for a total of 42 damage as a 2/2!

Getting into Familiar Territory

Some extra combat effects (e.g. Relentless Assault) also help to close out the game, especially with Kediss out. Plus, they synergize with cards like Loyal Subordinate and Tome of Legends! Whip of Erebos is great with Kediss as well, since both Kediss and Falthis will now gain life as a result of the damage dealt with Kediss's trigger. Finally, I bet you didn't think we'd be using Bloodsworn Steward not only to pump our two commanders, but also to pump our opponents' commanders once they commit an Act of Treason in our favor.

Put it altogether, and here's the most recent iteration of my very own menace-themed deck:

Finally, Archfiend of Depravity is a card I keep eyeing, but hasn't quite made the cut. While it helps to curb menace's drawbacks by culling opponent's board states to only one potential block, it almost always seems to eat removal too soon. I have been enjoying Vona's Hunger in its place, as it is instant speed, and can yield similar effects.

All in all, swapping commanders can sometimes be a fun new way to experiment with an idea or theme that you've been working with, and can shed new light on how best to tinker with your strategy. What decks have you swapped the commander for a different option? Did it retain the same basic idea or color identity, or did it transform into a new deck entirely? Are you as excited for the familiars as I am? Sound off in the comments below!