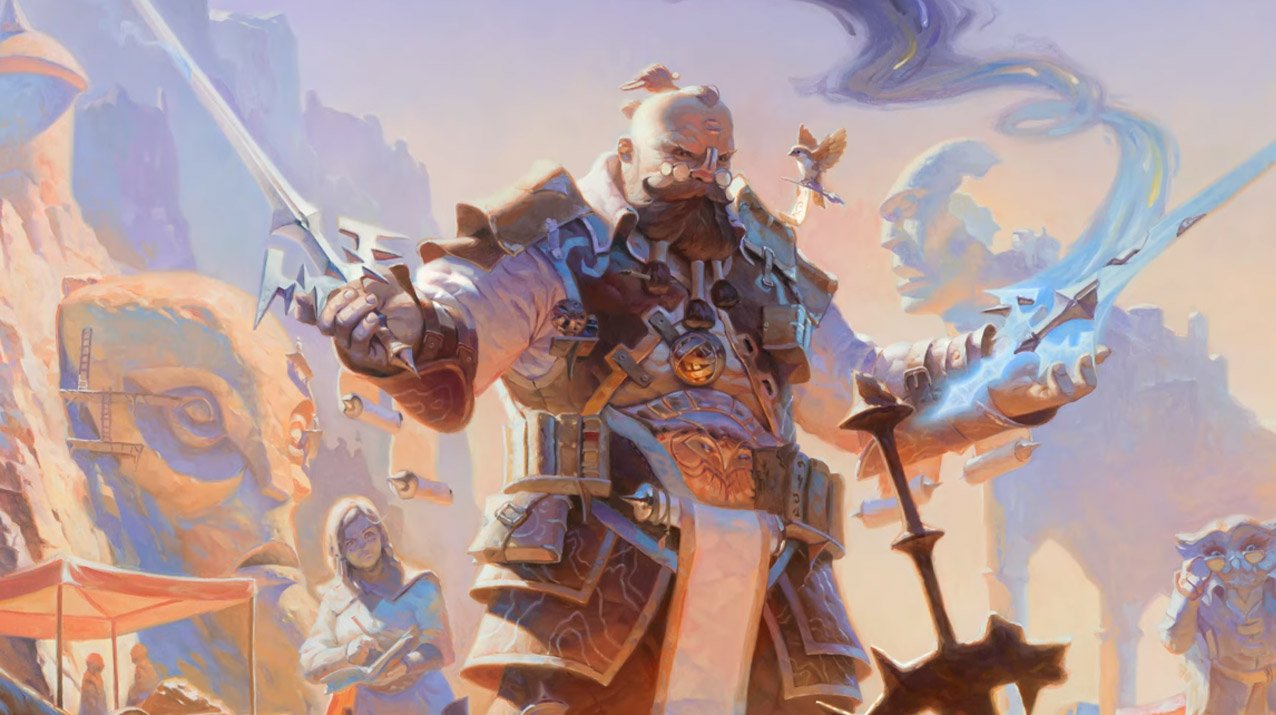 Welcome to the second installment of Family Feud! In this series, father and son (Mark and Max, respectively) will playtest the new Commander preconstructed decks against each other (both in 1v1 and in multiplayer games) and report their observations. They will then upgrade their decks and repeat the process.

For this installment, I chose the Lorehold Legacies (Boros) deck, commanded by Osgir, the Reconstructor.

I’ve been tinkering around with artifacts matter decks recently (specifically, ones commanded by Daretti, Scrap Savant and Feldon of the Third Path), so I was looking forward to trying out Osgir. I also recently upgraded my Wyleth, Soul of Steel and thought it would be fun to try another Boros deck that plays very differently than Wyleth. In Osgir, we have a commander that has both the ability to sacrifice an artifact and the ability to duplicate an artifact, so I figured this would make for an interesting first Strixhaven deck to try out.

Let’s look at dome deck stats. The 99 includes the following:

Overall, I’d say the deck contains a pretty good spread among the different card categories. As with all Precons, I never expect them to contain tutors or grave hate. Some of the cards included in these categories are excellent, like Arcane Signet, while others are pretty weak. For example, Unstable Obelisk is both a ramp spell and targeted removal, but it’s not really good at either. I’ve played this card in decks before and I don’t think I’ve ever been in a position to spend the seven mana to destroy a permanent. Another example is Boros Locket: it’s both ramp and card draw, but it’s over-costed.

Overall the deck is a little light on card draw for my taste, but it’s still in the acceptable range. The deck also contains five token-generating cards, but several of them are weak or not really on-theme.

As with most Precons, Lorehold Legacies can pull you in a number of different directions depending on which cards you happen to draw. I playtested this deck both in 1v1 against Max’s Prismari Performance deck and in our regular playgroup against a number of different brews, ranging from Precons to the significantly tuned decks. Against Max in 1v1, the deck held its own and was competitive, but it lost most of the time to the seemingly more explosive Prismari deck. That deck seemed to just go off out of nowhere from time to time. One game, Osgir, the Reconstructor was able to easily handle the Prismari deck, making effective use of leveraging Osgir’s second ability to generate the necessary mana advantage to control the board and the game.

Generally, my strategy with this deck is to get as many artifacts in the graveyard as possible early while doubling up on mana rocks with Osgir’s second ability. Mid game, when the life totals are lower and I have the mana available, I look to create two tokens of an artifact creature for the price of one, and use them to swing in for lethal damage. I found some of the most effective finishers to be Bosh, Iron Golem, Triplicate Titan, and Myr Battlesphere, especially when the latter two are doubled up.

The deck results were pretty similar in multiplayer games. I did not see that it had a distinct advantage or disadvantage based on the number of players. It’s the type of deck that can hang around fairly consistently in most games, even against some very good tuned decks, but sometimes struggles at times with “Okay, now how do I win?”

One of the challenges in both 1v1 and multiplayer getting enough artifacts in the yard to recur back using Osgir’s second ability. One way to help with this is to bring him out early and use Osgir’s first ability to sacrifice artifacts. However, this runs the risk of Osgir getting blown up a few times, and it’s not easy to replay him if he’s 8-10 mana in the late game when we need him most. As another method of filling the graveyard, in several games I just tried to stay over hand size on my end step as a way to discard.

Another challenge is the mana, as many of the spells cost a lot, and if the mana rocks get blown up… good luck. That said, Wake the Past can be an absolute game-winner if there are enough artifacts in the graveyard. Hellkite Tyrant can flat-out win on its own, too. Also, creating two Steel Hellkites for six mana, each able to destroy multiple permanents, is a significant problem for opponents if it’s not answered quickly.

Thoughts on the deck:

Lorehold Legacies and Osgir are interesting and different approach to a Boros deck for WotC. The deck is well-balanced out of the box and can compete against more expensive decks right away. It could use more focus, especially to become more consistent filling the graveyard or lowering the mana curve, but once there, I expect it will hold up against most mid-level, tuned decks. I’m looking forward to upgrading this deck and seeing what I can accomplish on a reasonable budget.

I chose the Prismari Performance Precon because it seems like a lot of fun to Storm off with huge spells.

Our commander is Zaffai, who rewards us for playing big spells. Here’s what the original decklist contains to support him:

A detailed look at this deck’s staple categories reveals the following:

Overall, this deck’s stats are very solid. A tutor or two would be nice, but I’m not complaining. For a Precon, this is very good.

Now, let’s look at the synergy in the deck. There are 29 total instants and sorceries, but how do they factor into Zaffai’s triggers? How do they work with the token-creating Magecraft abilities that help us create enough creatures to either defend ourselves, or else get a big enough army to win the game? Heck, how many Magecraft abilities do we even have?

Of the 29 instants or soceries:

Some of the best cards in the deck are Metallurgic Summonings, Swarm Intelligence, Sunbird’s Invocation, Mind’s Desire, Pyromancer’s Goggles, Apex of Power, Mana Geyser, and Surge to Victory.

This deck is definitely “Spellslinger” but there’s a lot of flexibility to that name. Depending on the cards, you can either play a classic Storm deck with cantrips like Brainstorm and Ponder, or you can take advantage of cards like Talrand, Sky Summoner to swarm the board.

Then there’s my favorite option: use cards like Pyromancer’s Goggles to copy biggest instant and sorceries possible, like Apex of Power and Epic Experiment.

I played this deck against Dad and the Lorehold Legacies deck as well as our playgroup. In 1v1 games, this deck was better than expected. I thought the deck would be slow and very clunky (which, it is, but it’s not as bad as I thought it would be) but the deck was fast enough to beat the Osgir, the Reconstructor deck reliably. I quickly realized that the second ability on Zaffai, Thunder Conductor – creating tokens – was very, very important, especially since Osgir was so focused on creating artifacts and having them enter or leave the battlefield, and therefore wasn’t committing a ton of creatures to the board.

Another huge lesson was the tempo. It’s a lot easier (and a lot more powerful) to hold up all the big powerful cards, like Mana Geyser, Swarm Intelligence, and Apex of Power, to just have this one turn that was so explosive that it would either win on the spot, or set up for victory the next turn.

In multiplayer games, I went on a tear with this deck, winning four games in a row. The 4/4s aren’t as impactful against multiple opponents with a combines 120 life as they are against a single enemy, so the most crucial thing to help win those multiplayer games was exactly that sandbagging strategy: hold spells back to set up for that one big turn, which would gain insurmountable advantage, either from cards in my hand or a ton of tokens on the battlefield. (In one game this deck deck got out over 100 power worth of creatures in one turn!)

Even in the games that I didn’t win, this deck was very matched up with the table. I think this deck can play above its power level because it has that explosive capability and the card advantage to back it up.

This deck is fun with a lot of play patterns in a popular archetype with cards for new players and older players to enjoy. It’s a bargain at $40, and it’s an interesting deck to upgrade depending on the way that you take it. The commander is powerful without being oppressive, so you don’t get targeted, and the Magecraft mechanic can set up extremely powerful plays. This deck is also very well-balanced with the other decks so the games are close and engaging. It’s exactly the type of thing we ask from a Precon.

Those are our first impressions from the Precons right out of the box. Tune in again soon to see how we plan to upgrade these decks now that we have this experience under our belts!

Max started playing Magic at camp, M15 set. When he's not in school, playing EDH or tweaking his beloved Teysa deck, he is playing baseball, basketball and football. Mark (Max's Dad) agreed to a quick game with Max one day and got hooked. In addition to Magic, he enjoys golfing, skiing, coaching sports teams, playing music and spending time with his family. They live in the Boston area.