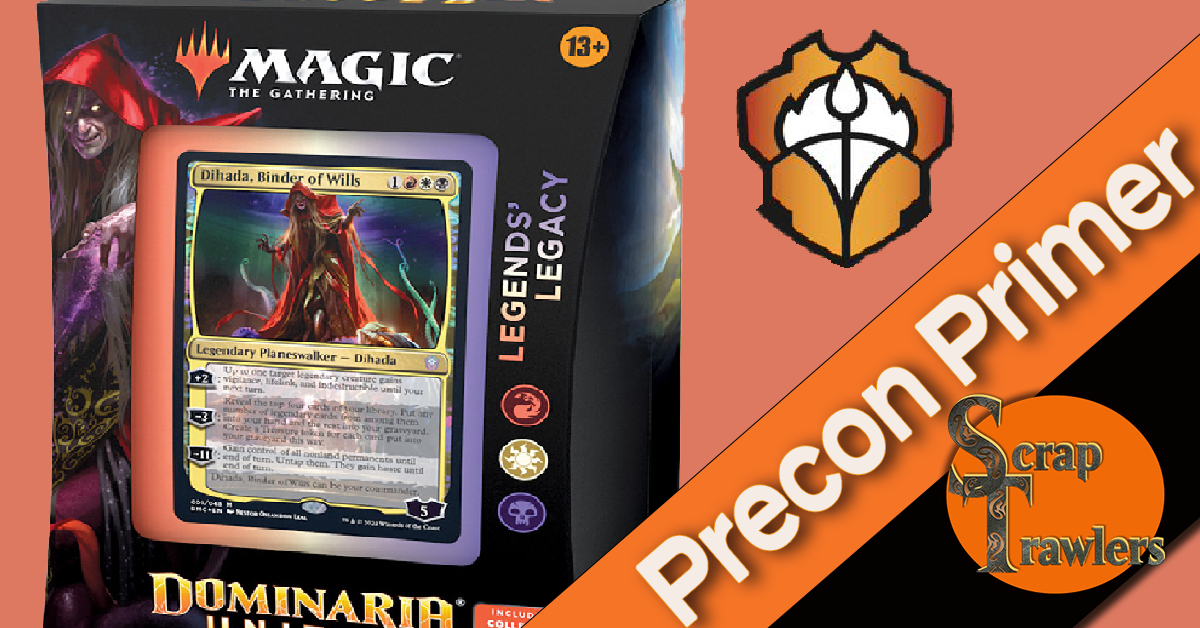 Hey friends! Welcome back to our Precon Primer series, where we guide you through the ever-growing blitz of preconstructed Commander decks. We look at each deck’s strategies, strengths and weaknesses, best new cards and reprints, and how to play them right out of the box. I’m Andy from the Scrap Trawlers, where we do EDH on a budget, and today we’re looking at the Legends’ Legacy deck, from Dominaria United.

Forget About the Ultimate. Ain’t Happening.

This deck is led by a planeswalker, Dihada, Binder of Wills, a red, white, and black commander with a mana value of 4 and starting loyalty of 5. Her plus 2 ability gives one of your legendary creatures vigilance, lifelink, and indestructible until your next turn. Not the end of this turn, your next turn - a very important and effectual distinction. This ability pairs beautifully with one of the reprinted legends in the deck, Odric, Lunarch Marshal, who shares your creatures’ keyword abilities with each other at the beginning of each combat. This powerful coupling not only gives you the ability to swing with impunity, but with Odric triggering on opponents’ combats as well, you’ll also block worry-free. Oh, and you’re gaining life all the while, ensuring you’re in the game longer! It’s likely your opponents won’t even attack you since they’ll just end up helping rather than hurting you, which means they’ll send their creatures elsewhere. Win-win.

However, there’s a good chance your stuff will be continually hated off the board (don’t expect Odric to stick around long). That’s where Dihada’s minus 3 comes in. She digs through the top 4 cards of your library, puts the legends in your hand and the rest into your yard, and gives you a treasure for each card you lost. It’s a nice little bit of card advantage and ramp that’s going to keep you from falling behind.

Then there’s her ultimate, a minus 11. I always say that you shouldn’t judge a planeswalker by their ultimate. That's especially true when the ultimate is so far away from their starting loyalty, as is the case with Dihada. Yes, having all of your opponents’ stuff for a turn could be game-ending, and fun. But keep in mind that: (a) your opponents will never let Dihada get to 11, and (b) even if they do, it’ll be 4 turns from when Dihada enters that you’ll actually be able to activate it. It’s nothing more than a mirage; you’ll keep trying to reach it, and it’ll keep getting further away. So don’t get your hopes up.

Based on her first ability alone, Dihada’s a keeper, and a powerful leader for a Mardu aggro deck, which is exactly what we have with this precon. Here’s the full decklist for Legends’ Legacy:

Our backup commander for the deck is Shanid, Sleepers’ Scourge, a Human Knight creature that gives all your legends menace and provides some solid card advantage. The fact that the card draw triggers off of playing legendary lands is really fun and unique. Sadly, the deck only has 4 of them, which is a real missed opportunity. But the deck isn’t built around Shanid, so I guess we shouldn’t be too surprised. And Dihada is, in most ways, the stronger commander anyway.

Legends’ Legacy is an aggro deck, through and through. Your goal is to drop powerful legendary creatures on the board and bloody your opponents with them. The deck includes 28 creature cards whose raison d’etre is to be turned sideways, which may seem like a lot since it’s a quarter of the deck, but actually feels a little low when playing it (more on this a bit later). There is also a token sub-theme, with 8 cards allowing you to make creature tokens. It’s a weak sub-theme, but it’s there and worth mentioning.

Anthems are a necessary seasoning for any aggro deck, and this precon certainly ain't bland, including cards like: Day of Destiny, Arvad the Cursed, Heroes’ Podium, and the beloved - at least by me - Odric, Lunarch Marshal. There are also several ways to pump individual creatures, such as: Blackblade Reforged, Sword of the Chosen, and Tenza, Godo’s Maul.

The biggest beaters in the deck are: Traxos, Scourge of Kroog, Kothophed, Soul Hoarder, and the two elder dinosaurs that have become perennial precon favorites, Etali, Primal Storm, and Zetalpa, Primal Dawn. Any aggro deck in white that doesn’t have both Zetalpa and Odric is either trying too hard to be hipster, or simply uninformed. These two together are like your favorite buddy cop movie, with Zetalpa being the mullet-clad loose cannon with nothing to lose, and Odric being the grizzled veteran who's two weeks to retirement (yes, I made a Lethal Weapon reference. Don’t “Okay, Boomer” me).

Like I said earlier, the creature count is actually a bit low. In one game I played with the deck, I only drew one creature in the first 8 turns. That was probably mostly due to a bad shuffle, but keep in mind when you’re playing the deck that without legendary creatures to affect, Dihada does very little. Try to get at least two creatures in your opening hand along with your usual 3 or 4 mana sources. And preferably have one of them be cheap so you can play it before you bring out Dihada.

The mana package in this deck is decent. The 39 lands is a bit generous for most singleton aficionados, but a nice amount for a precon looking to teach new players. With the 11 ramp cards, that brings us to exactly 50 mana sources, which is perfect for the deck’s 3.52 average mana value. That said, I’d appreciate dropping that MV down just a bit, but we’ll talk about that more in the upgrade guide.

I was able to play this deck in a pod where the other 3 players were playing their regular home brews. And while the deck had a rough start, I did end up winning the game thanks to beatdowns, with support from Arvad the Cursed, Jazal Goldmane, and Dihada herself. Once it gets going, the deck’s power is unmistakable. It’s the getting going part the deck needs work on.

Let’s see what this deck has to offer for new cards. As you can guess with the deck’s legendary theme, all of the new cards are legendary, with two being artifacts and the rest creatures (side note: there’s nothing in the deck that cares about legendary artifacts specifically, but a few cards that are affected by Historic spells, which includes all artifacts, and Dihada’s minus ability looks for any legendary card). We’ll start with the most hyped new card from the deck, our treasure-maker du jour: The Reaver Cleaver. An incredible addition for any voltron deck in red, and a solid inclusion for any aggro deck with big creatures. It’s not cheap to equip, but hey, it pays off.

Gerrard’s Hourglass Pendant provides great board wipe protection, although holding up 4 or 5 mana for it is asking a lot. Especially if you’re the one trying to board wipe and you need that 4+ other mana to cast it. I’d be happy to run this with Zirda, the Dawnwaker though.

Then we’ve got a bunch of new legendary creatures that, frankly, don’t really belong in this deck. WOTC’s got their card designers working overtime making new legendary creatures to satisfy the insatiable hunger of us Commander enthusiasts, and they’ve clearly shoehorned a few into deck that really don’t synergize. But, they’re here, so let’s talk about them. First up is a sweet token maker, Cadric, Soul Kindler. Being able to make token copies of all your legends as they come in is a really fun ability, and makes it easily the best of these new creatures. It’s not in the proper colors to really abuse it, which can be a good or bad thing depending on how you look at it. My dream for Cadric is to find a way to pair him up with Stangg, Echo Warrior so that I can put legendary Equipment on Stangg and not lose them when he makes his twin. Some day…

If you’re looking to play with your graveyard (and who isn’t?), then we’ve got Moira, Urborg Haunt and Bladewing, Deathless Tyrant. Both really solid commanders if you build around them. Moira could lead a fun aristocrats-y voltron deck, while Bladewing likes to see most of your deck six feet under. This dragon could be fun leading its own deck, if you don’t mind that heavy cost, or even better in the 99 of the mad Anje Falkenrath.

Next up, a brand new colorless legend that sadly won’t do well leading its own deck: The Peregrine Dynamo. I’m upset that they nerfed this one with the non-commander clause for the copying, but there are still many ways to take advantage of the Dynamo. Super-friends decks could certainly have a lot of fun with it.

Zeriam, Golden Wind wants to make you lots of griffin tokens, and…yeah, that’s it. And Verrak, Warped Sengir has absolutely no business being in this deck, aside from adding more keywords to the soup, but it could do some silly things with fetch lands.

Alright, time to wrap things up and give you my final verdict on the Legends’ Legacy precon. So let’s not beat around the bush.

The deck is solid, with some really great aggro synergies. Some of the new legends they squeezed in here don’t really make the deck stronger, but they’re nice to have in your arsenal for other decks. From a value standpoint, The Reaver Cleaver covers a really decent chunk of the cost on its own. There’s a few valuable reprints as well, with Shizo, Death’s Storehouse being the biggest one, along with Day of Destiny and Bontu’s Monument also helping to make this a great package deal. The pace of the deck needs to be picked up a bit to really show its power, but in a full precon pod, it has no trouble holding its own. So unless you already have most of the cards, this one’s worth picking up.

Thanks for stopping by, friends. Keep your eyes peeled here on EDHREC for the best Commander content on the web, and make sure to watch for more of our precon guides, including my guide for upgrading this list. And don’t forget to find the Scrap Trawlers on Twitter, YouTube, and Twitch. Take care, everyone!