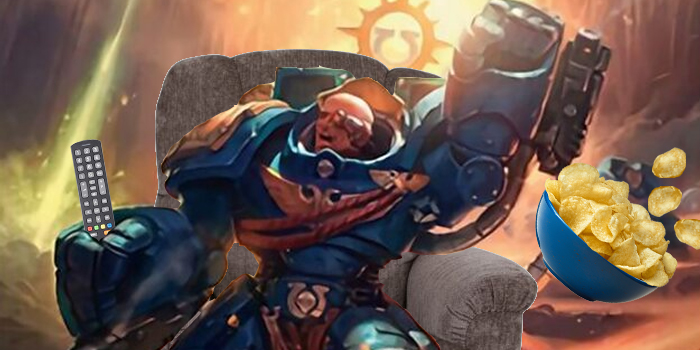 Give it a Rest

Hello, and welcome back to Power Sink, the article series where we take take the commanders that make decks that your opponents don't have to lift a finger to compete with, using commanders that usually make them lift a very specific finger. This time we're looking at the new hotness from Universes Beyond: Warhammer 40,000 with Marneus Calgar.

Being so new, Marneus only has 133 decks on EDHREC. I can't speak to how much that number will grow, but there's been some buzz about the card on social media. Marneus is certainly powerful, but some say the card is a lazy design and that the deck builds itself. Drawing cards whenever you make a token is quite the card advantage engine, and the Esper color combination is one of the better ones to do this in, especially with the passive token generation in white. There are even some combos available with this commander, which are easy to find with black and easy to protect with blue. Marneus can also make tokens with his activated ability to draw even without any other cards. He also does pretty well in combat, being a 3/5 with double strike.

Even though it's so new, there's already something taking shape in the average deck:

From the looks of the average deck, it's clear the cEDH community has taken an interest in the commander. Fast mana, such as Mana Crypt and Mana Vault, are present alongside free countermagic, like Force of Will and Pact of Negation, and tutors, like Vampiric Tutor and Imperial Seal. We also see staxy pieces, like Opposition Agent, Drannith Magistrate, and Dauthi Voidwalker, which tend to be confined to cEDH decks.

As I mentioned earlier, Marneus is a combo piece, and this deck has quite a few of these represented. Dramatic Reversal and Isochron Scepter are a well-known combo for generating infinite mana, and since Marneus has an activated ability that costs only colorless mana and draws cards, this can be used to draw through your deck and win with Thassa's Oracle. Of course, with Oracle, there's Demonic Consultation to exile your library. Marneus can also draw infinite cards by using Training Grounds and Ashnod's Altar to pay for his activated ability.

In addition to the combos, this deck is filled with passive token-producers that suddenly become card draw engines with Marneus out. Bitterblossom now gives you a card each turn and Black Market Connections gives up to three. If any of your creatures die, Pitiless Plunderer can get you a card to go along with that Treasure token while Grim Hireling rewards you even more for combat. Monastery Mentor makes tokens for casting noncreature spells. Smothering Tithe with Marneus has you drawing a card whenever an opponent doesn't pay that tax, and if you want to make tokens whenever you draw, there's Nadir Kraken.

Notably there are also many cards on this EDHREC page from the very deck that Marneus comes from. I suspect this is from the "Precon Effect" and as time goes on we'll see less of them as the data takes shape, so I'll skip discussing them.

With so much available token synergy it seems like you can make a deck that draws a card for pretty much anything that happens in a game of Magic with little effort, so how are we going to power this one down? You could just put Marneus at the head of the precon, but where's the fun in that?

I've got a much better (read: probably worse) idea. Every card in the deck must make us a token, save for basic lands. I don't mean cards that could make us a token in edge cases (we all know who ends up getting the Elephant from Generous Gift 98% of the time). Yes, we will be drawing cards for just about everything, but we're going to use some terrible cards thanks to this limitation, and there's a chance we deck out before we can win. I don't know about you, but that sounds like fun to me, and I only needed one Scryfall search to do it!

Normally I gloss over the basics like ramp and removal, but the limitations on this deck mean we're reaching even for the most basic of effects. There isn't much in the way of mana rocks that make tokens. Crowded Crypt and Replicating Ring exist, but for the most part we have to rely on Treasures to supplement our mana, and other than Smothering Tithe, these aren't the overpowered cards you hear about in the discourse. Thieves' Tools and Gilded Pinions only make a single Treasure, but they also grant evasion to our commander. Marching Duodrone, Malcolm, Keen-Eyed Navigator, and Zhentarim Bandit can get us some mana for wading into combat, and if that doesn't work, we can use Noble's Purse or take our chances with Bucknard's Everfull Purse.

To fit the theme, our removal also needs to make us a token which means fewer options than you'd expect. We're using single target effects, like Bake into a Pie, Gone Missing, and Citizen's Crowbar, while turning to Kirtar's Wrath and Crush of Tentacles.

To keep our cards in play, we have counterspells, like Access Denied and Spell Swindle, as well as creature protection from Fake Your Own Death and Grand Crescendo. Perhaps my favorite trick is Not Forgotten, which becomes a Regrowth with our commander out.

On some level, I think we all would love to get paid for doing next to nothing. Marneus will let us live that dream at least in a Commander game. There are plenty of cards that will churn out tokens for us as part of the progression of the game, and we can just put our feet up and watch the cards roll in.

Bitterblossom, Court of Grace, and Doomed Artisan reward you for just going through phases, while Nadir Kraken and Ethereal Investigator make tokens for drawing cards. Creatures die all the time in Commander, often without you doing anything, and Overseer of the Damned, Pitiless Plunderer, and Requiem Angel are there to fill our board when that happens. We could play Revel in Riches, but I'm concerned the deck would just become all about that card, even if it's on-theme.

We're making tokens for playing lands with Field of the Dead and for casting spells with God-Eternal Oketra, Monastery Mentor, and Clarion Spirit. Even our opponents casting spells gives us something thanks to The Council of Four. Oh, and since we're making all these tokens, we've got Thalisse, Reverent Medium so that we can make tokens when we make tokens.

At some point we need to get off the couch, by which I mean win the game. For the most part we're doing this by attacking with a token swarm. So far we've mostly had ways to get small tokens over time, but sometimes we'll need a swarm out of nowhere or some creatures that hit a bit harder. We can spread the love by giving our creatures Myriad with Legion Loyalty. Finale of Glory and Horn of Valhalla let us dump our mana to make an army, and the horn works nicely with our commander with his double strike.

Similarly, Wand of Orcus will make blocking Marneus very unattractive, and will make us a Zombie horde when we connect. If our tokens need a boost, Ultramarines Honour Guard can give that many times thanks to it's squad ability. Finally if we just need a big evasive creature or two, we can cash in our small fries to Dreadfeast Demon.

I'm quite happy with how this deck turned out. It looks scary because it draws cards almost constantly, but I think it's held back well enough by its inefficient removal and ramp. It's also important to note that Marneus's draw effect is not a 'may' ability, and many of our token-producers can be triggered by opponents, so we can lose to your own hubris which, in my opinion, is the best way to lose in Commander.

That's all for this time, let me know in the comments if this sounds like a fun deck or if Marneus is just an un-Power Sink-able ship.