Ranking Every Land with EDHREC – Part 23: Reflecting Pool (Not the Tempest One) 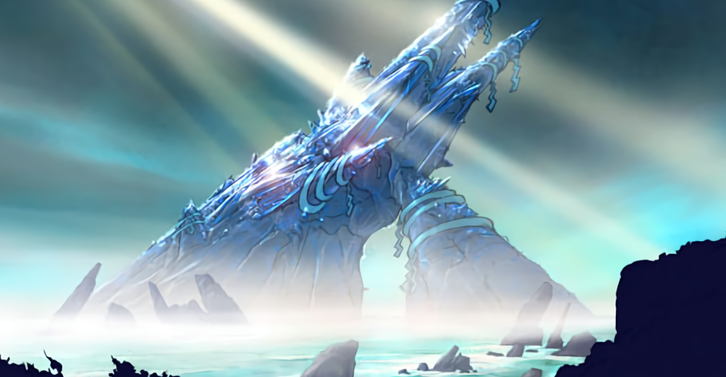 (Mikokoro, Center of the Sea | Art by John Avon)

A Sense of Status Quo

Well, let's see: two weeks ago we had the set reviews for Theros Beyond Death, which revealed that the set was about as bonkers as I expected. Then last week we did our retrospective on 2019, remembered that Idyllic Grange existed, and then forgetting about it again. It's been a little while since we've had just a normal article.

Well, as normal as it can be when the article series mainly involves one man throwing sanity out the window to rank every land in EDHREC based on how many decks they have on EDHREC. This process is certainly something, but 'normal' it is not.

I think the rest of these legendary lands desensitized me to how crazy these could be. The rest of the cycle says "Hey, I'm Tolaria and I'm a nonbasic Island that can do something that will almost never come up, so maybe consider playing me? Or not, that's okay. I'll just sit in this box in the corner with all the other rares you forgot about." By contrast, this card says, "Yo! Are you playing blue? Here's half of a Thousand-Year Elixir! Start removing Islands from your decks. Bow before my relevancy!"

I can't even state all the decks this goes in. Any commander with a tap ability is made way better with this. Any big commanders also now have vigilance. Any legendary creature on opponents boards' can be weaponized for your benefit. It’s actually tough to find a commander that this isn’t good with. It’s not good with Teferi, Temporal Archmage. Other than that...?

Over, Under, or Just Right? Under: It should be close to an auto-include if your commander has a tap ability which is why the price has shot up.

It's fine. Double strike is good, but when are you ever going to leave up five mana for this effect? It might come up occasionally, but, for the most part, the land is just meh.

But who cares! We're finally done with the Ravnica: City of Guilds Guildhalls! What have we learned? If you’re going to name a card after a central place in the narrative like Duskmantle, House of Shadow, maybe give it a decent ability, or forever regret wasting the name on a middling card. I'm going to quickly forget about these and use the brain space to come up with more puns for the title of these articles.

Over, Under, or Just Right? Overplayed: Thus we end as we started. Pretty not good.

Dragons are an interesting tribe. Most tribes basically want to be a fixed set of colors either because the best commander for that tribe is in those colors (Edgar Markov), or the tribe needs a certain combination of colors to really function, like with Slivers. Even when tribes like Zombies are dabbling in white, most of the commanders and payoffs are in Dimir, so that’s the core in most cases.

Dragons are an exception, though. They're often five-color for stuff like The Ur-Dragon, but I'm just as afraid of a Karrthus, Tyrant of Jund deck or a Lathliss, Dragon Queen deck. Heck, you could probably build a redless Dragon deck and it would still take down most of my decks. It says a lot about how flexible and well-loved Dragons are that they can fit a variety of colors and styles.

Over, Under, or Just Right? Just Right: I don't know about the almost 200 people playing it in Kozilek, the Great Distortion. Ugin, the Spirit Dragon is a good card but he is 1 of 100.

Ouch. Two life just to tap for mana is really bad, in addition to being a tapped colorless land. As with Hall of the Bandit Lord, most opening hands with this land are basically unkeepable. However, that effect is pretty tempting. Most non-blue decks are gonna have a tough time protecting key spells from countermagic, and this is a great way to do that. Casting a Rise of the Dark Realms feels great until it gets got by Negate. I don't actually own a copy of this because it's pretty dang expensive, but I often think about buying one. I don't want to because it looks so bad, but it means I could cast my Villainous Wealth and not just straight up lose to Mages' Contest.

Over, Under, or Just Right? Just Right: I can’t find evidence that’s it’s going in decks it doesn’t belong in, but it’s really dependent on the type of deck and the meta the deck is playing in. If your deck wants this card, you'll know it.

Let’s be clear: scry 1 is cute, but it's not worth possibly screwing up your mana or running this over the many much better utility lands, even on a budget. This is strictly a colorless land only. It's certainly better than gaining two life with Radiant Fountain but not by a lot. It’s perfectly fine, but every time a land like Detection Tower comes out, this card should get closer and closer to the chopping block.

Over, Under, or Just Right? Just Right: I hesitate to give it that rating, but it’s a cheap colorless land with a decent effect for a fair price.

This is kind of a weird one. It’s definitely a card for Commander and not much else. Two-player formats don’t really want to give opponents more card advantage, especially when the player with Mikokoro spends the mana. In theory, that problem seems amplified in Commander, except it can actually be a positive sometimes. Not only is it card advantage for decks that struggle in that department, but there are many scenarios where Mickey K can help an opponent come through with the answer to a problem. “I don’t have a answer to that enchantment in my mono-red deck, but you might.” That sort of thing. It’s kind of a neat reflection of Magic as a whole that a negative in one format can be a positive in another.

Over, Under, or Just Right? Just Right: And obviously decks like Nekusar, the Mindrazer exist that want everyone to draw cards.

I may dress up my series with stats and some fancy formatting, but ultimately this series is just about some random dude talking about Magic cards. I obviously haven’t played with all six-hundred-and-however-many lands there are, so often I’m speaking theoretically about most of these, or I’m discussing why I wouldn’t put them in decks I owned.

Mirrorpool is not one of those lands. I've had a ton of actual experience with Mirrorpool, and I love it. At the moment, Mirrorpool is probably my favorite land ever. It’s a colorless land that enters tapped, so it better do something real good, and it delivers. First mode can copy any spell you control. It’s Doublecast on a land. Copy anything from Mana Geyser to Urban Evolution. I’ve even copied Nature’s Claim before, and it still felt great. And the best case scenario is doubling the X on a Villainous Wealth or Torment of Hailfire. Is that winmore? Absolutely. Will I do it anyway? Every time.

The second ability can clone any of your creatures. It’s rather expensive, but the effect is well worth it. It can save key creatures from removal by cloning them, it can double up an enter-the-battlefield trigger like Bane of Progress, or it can just make another giant attacker like Hydra Omnivore. That’s not counting synergies like Brudiclad, Telchor Engineer. Yes, I would like to make five Frost Titan with my land! This is all on a land. A land that can end a game with the right card.

The only hurdle is the colorless mana required to activate it. That is an issue, but not as big as it looks because A) most decks are already running a few colorless lands, and B) they don’t have to be colorless lands. A Sol Ring or Hedron Archive or Blinkmoth Urn can activate this land, and you only need one source. It's not great activating this till late game, anyway, so I’m comfortable running this with only four or five ways to make colorless mana.

Over, Under, or Just Right? Underplayed: I am absolutely biased, but at the very least, Mirrorpool should be in every colorless deck that can afford the $3 card.

Top commanders for this card:

Over, Under or Just Right? Overplayed: It’s not that Khalni Garden is bad. It's that it isn't great at making tokens, or great at being a land. So why not play good cards that make good tokens and cards that are good lands?

Hideaway lands! We haven't seen the Hideaway cycle since over 200 lands ago. Remember Howltooth Hollow? I do, and I think me and Grenzo, Dungeon Warden players are the only ones. Yeah, there's a reason people only remember three of these, and it's not just because they print them into oblivion.

Hideaway is extremely busted, and turning on Windbrisk Heights is pretty trivial. Cast and then flashback Lingering Souls, or +1 Elspeth, Sun's Champion, and you can have an Elesh Norn, Grand Cenobite for two mana! Most token decks are already playing this, but I think most mono-white decks probably should be running it, as well. Everybody knows about the lack of mono-white card draw; here’s a card that lets you Impulse and cast a card for free in most mono-white decks!

Over, Under, or Just Right? Underplayed: Hey! Wizards made a cycle and the white one isn’t the worst!

I don’t know. Are there good lands to copy with this? Have I mentioned any in the 258 lands I’ve been through so far? Probably not. (Again, heavy sarcasm.)

Jokes aside, how many good lands do you need to run to enable Vesuva? Copying Cabal Coffers feels great, copying Woodland Cemetery doesn't. If you have stuff like Crop Rotation or Expedition Map, then there’s less of a chance of the feel bad, but even then, playing this as a tap land on turn two feels gross.

Now, the effect is pretty unique, so I might say the downside is worth it, if Thespian's Stage didn't exist. Stage comes in untapped, and can be saved till late game, where there will almost always be something worth copying. Vesuva is better if it can be returned to hand, I guess, but I think Stage just does everything Vesuva can do, with none of the downside. Plus, Stage isn't $30!

Over, Under or Just Right? Overplayed: Not unplayable; some decks want two of this effect, but I would reach for Thespian's Stage almost every time.

Good to be back to a regular routine! Let me know what you think about this batch of lands somewhere on the internet! Do you play Vesuva over Thespian's Stage? Do you not play Mirrorpool, and why are you a monster? All of these and more can be answered by you! Until next time, enjoy your Theros Commander adventures!