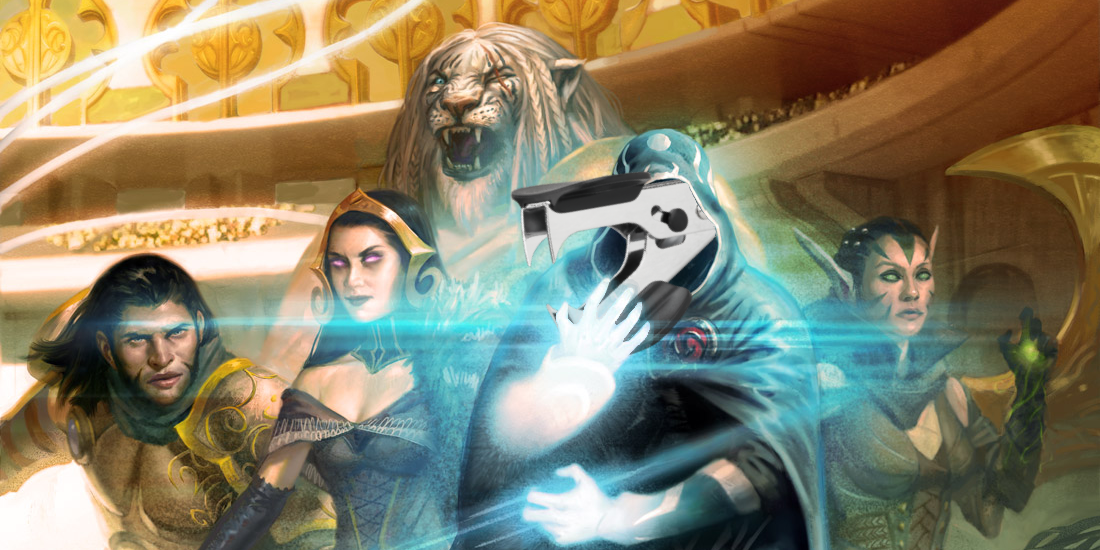 Okay, so, hear me out: there are rumors that Quandrix's latest pet project gone wrong, Esix, Fractal Bloom, has been found digging through the deepest corners of The Biblioplex, practically tearing through oft-forgotten spellbooks to try and find a way to finally reach infinity. We just gotta follow the mathematical scribbles on the floor and maybe we can find infinity, too!

What about the Isochron Scepter? Oh, you haven't heard? Dean Augusta locked it up in her office after last month's incident. Something about the Quandrix kids using it to gloat and pick fights with the Lorehold kids. Ruining it for the rest of us, as always! But I assure you, whatever we find in The Biblioplex will be much more fun.

There are few combos as iconic as Isochron Scepter and Dramatic Reversal; not only is it one of the most popular combos in EDH, finding a home in over 18,000 decks according to the EDHREC database, but it's also the historic combo of choice for some decks on the competitive side of the format.

Isochron Scepter acts as the basis for this combo, and some others. On its own, the Scepter gives a good amount of advantage when you Imprint an instant underneath it, such as a Swan Song, Brainstorm, or my personal favorite, Benefactor's Draught. Reusing cards, especially cards that draw you more cards, is a potent form of card advantage that Isochron Scepter excels at. When combined with Dramatic Reversal (and enough mana-producing nonland permanents), it can produce infinitely large sums of mana and more.

Dramatic Reversal is a more unassuming card, being a mere common. On its own, it can give you emergency blockers, and if you have mana-producing creatures or artifacts, it can allow you to draw extra mana from them, not unlike noteworthy ritual effects such as High Tide or the iconic Dark Ritual. However, in decks that don't have those rocks and dorks, such as ones that use other forms of ramp or simply don't need ramp, Dramatic Reversal has a hard time pulling its weight - and so does this combo.

Commonly, if you're lacking in mana rocks or dorks, it means that you're making up for it using land ramp. And in decks like those, there are a myriad of great finishers besides Isochron Scepter and Dramatic Reversal - many of which involve Retreat to Coralhelm.

There's a running joke that you can make a very dangerous drinking game by taking a shot every time you see a combo using Retreat to Coralhelm on Commander Spellbook. The bulk of Retreat to Coralhelm combos involve some way to put a land onto the battlefield (such as Walking Atlas) and a land that you can easily return to your hand (such as Oboro, Palace in the Clouds), allowing you to get infinite Landfall triggers with an outlet such as Retreat to Hagra. When it's not comboing with one of over 1,000 combinations of cards, Retreat to Coralhelm can tap down blockers and provide decent card selection, as well.

Walking Atlas is especially useful in Landfall decks as a nongreen, budget alternative to Exploration, but if you're willing to dip into other colors, there are a plethora of alternatives for it, too, all of which easily slot into any Landfall deck. Sakura-Tribe Scout, Budoka Gardener, and even Scaretiller can ensure that you have plenty of redundant and synergistic combo pieces to win you the game.

Oboro, Palace in the Clouds is an incredibly potent piece, both for combos and general synergy. It ensures that you have as many Landfall triggers as you have land drops, with no restraints on how many lands you have in your hand, and, combined with Retreat to Coralhelm, it creates a potent loop. It's also about $70 USD at the time of writing, so, luckily, there's additional powerful tech with bouncelands, such as Simic Growth Chamber. Another interesting card that's a tiny bit harder to combo with is Ghost Town.

The combo between Deadeye Navigator and Peregrine Drake is another classic, at one point becoming so popular that hearing requests for Deadeye Navigator's banning wasn't uncommon. The combo has gone by the wayside in many metas ever since the more competitive combos (such as Isochron Scepter and Dramatic Reversal) were released, but it's still a fun finisher for creature-based decks that focus on enter-the-battlefield effects.

The power of Deadeye Navigator is hard to dispute. If you've seen any Emiel the Blessed decks as of late, I'm sure you've seen just how strong instant-speed flickering can be for combos, value engines, and board protection, and having access to blue means that you get potent cards such as Mulldrifter to abuse, too. The ceiling of this card is a simple one-two combo with Peregrine Drake or Great Whale, as each time you use it to flicker one of these permanents, you're netting a substantial amount of mana.

Peregrine Drake isn't the only of its kind, nor is it only abusable with Deadeye Navigator. Things like Great Whale, Palinchron, Treachery, and even Cloud of Faeries can combo with a multitude of spells that either flicker or bounce permanents, such as Illusionist's Stratagem or simply Shrieking Drake. Just like Dramatic Reversal, if you don't have your other combo pieces out, they can act as a "ritual" to get your mana back and cast more spells, except they're a bit more reliable than Dramatic Reversal since you're more likely to have lands.

Zaxara, the Exemplary + Freed from the Real Combo Page

This creature-based infinite mana combo (and variations of it) are very simple: all you need is creature that can tap for at least two blue mana and a way to untap that same creature for one blue mana or less.

Sometimes, it can be easier to get one big mana dork than it can be to get several mana rocks, for example, if your commander is Zaxara, the Exemplary. There are many ways to get enough dorks for a combo with one of these cards, especially in Simic (or Quandrix) +1/+1 Counters lists with Incubation Druid or Bloom Tender. Without Pemmin's Aura, these cards still work as decent ramp pieces, allowing for you to easily cast big, splashy spells as early as possible.

The most important part of the combo is some way to untap these dorks: Pemmin's Aura and Freed from the Real are the two classic enchantments that do the job, especially if you have enchantment synergies, such as in an Estrid, the Masked deck. If you're in a +1/+1 counters deck, Vigean Graftmage is an easy inclusion that can synergize with any dork, even if it's not establishing a loop. Variants of this combo exist in monogreen with Quirion Ranger, Scryb Ranger, and Wirewood Symbiote, for additional combos and synergies in Landfall or in Elf lists.

A Stack of Combos 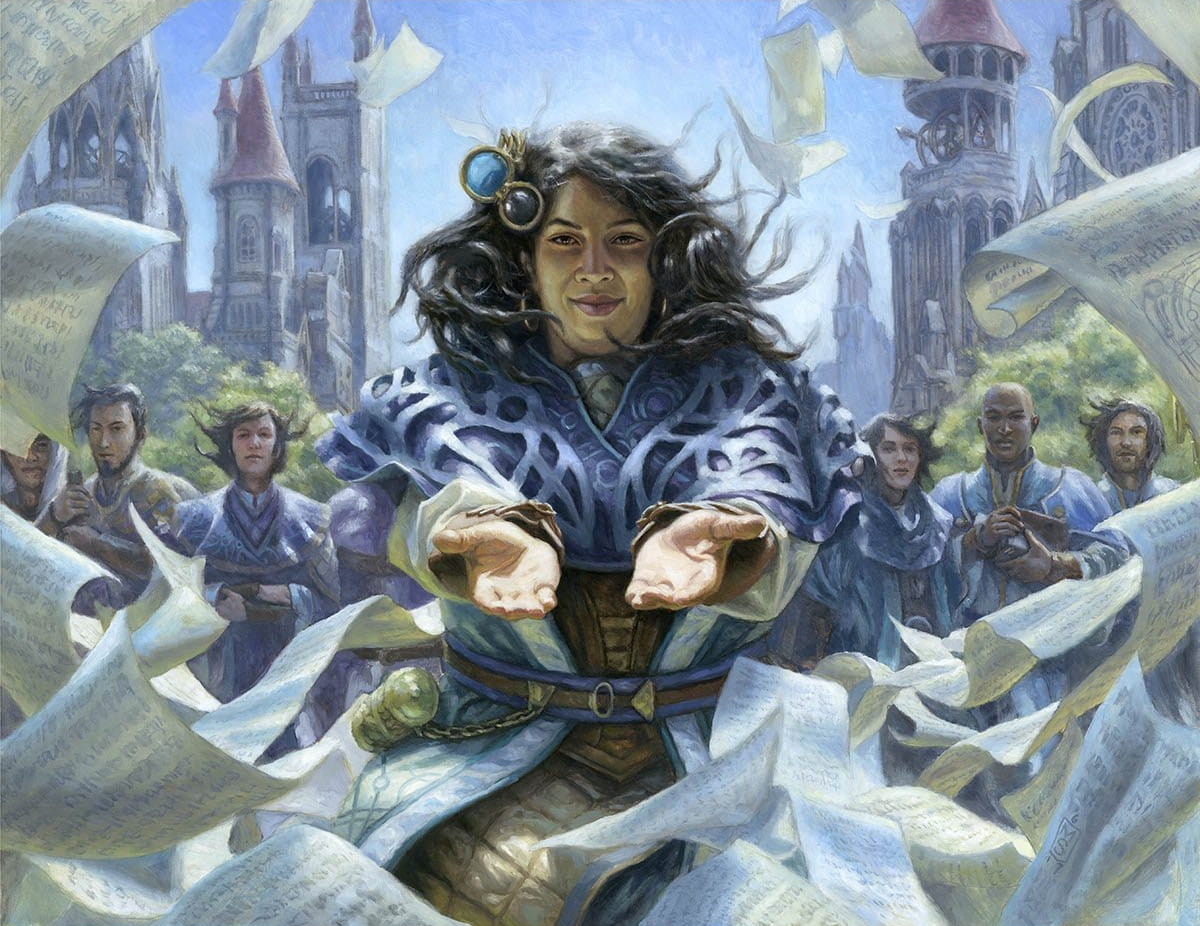 My favorite thing when building a deck is flexibility, both by having a diverse array of cards in the list itself, but also having cards that can be used in many different ways. These three cards especially - and many of the cards mentioned before - are diverse like that, with dozens of different combinations and synergies that often happen to go infinite.

One of the easiest ways to go infinite is simply by copying things on the stack. Naru Meha, Master Wizard is a recent example that excels at this, but there's also fantastic cards outside of blue, such as Dualcaster Mage. It seems like every set gives us new toys in this department to play with, and although they aren't always easy to combo off with (or they're banned, like Lutri, the Spellchaser), the potency of these cards, despite their lack of combos, just shows how powerful their predecessors can be.

One of Naru Meha, Master Wizard's favorite spells is Ghostly Flicker. Ghostly Flicker is the most famous of a group of cards that combo with Archaeomancer and Arcane Melee, Dualcaster Mage, Felidar Guardian, and more. Ghostly Flicker, Illusionist's Stratagem, and their ilk are fantastic both in and out of combos, acting as protection pieces, ritual effects, and synergy pieces for the plethora of creatures with enter-the-battlefield triggers.

Next time you're looking for a finisher for your deck, checking Commander Spellbook and seeing what combos you can include to synergize with your deck is a great option. Sure, you can go for the standard Isochron Scepter / Dramatic Reversal combo, but you could be sitting on a treasure trove of dynamic, potent pieces that can incidentally close out a game for your spellslinger and flicker decks. Redundancy and diversity can make your games a blast as you find all of the different ways to build your combo machine.

What're your favorite wincons in your blue lists? Do you like to use combos, or do you prefer the traditional cards, like Mind's Dilation? What do you think of Commander Spellbook? Feel free to let me know in the comments, and as always, thanks for reading!