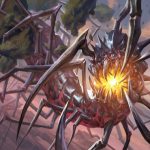 Doubling the odds makes them even!

Maybe random merpeople handing out swords IS a good system of goverment....

Just over half a year ago, a card was announced that made many people call for it to be banned even before it was in our hands: Paradox Engine. Some even believed it would end up being banned in standard, which was hyperbolic, and at times I can even see why someone might want Paradox […]