These Cards Do WORK! - Rem Karolus 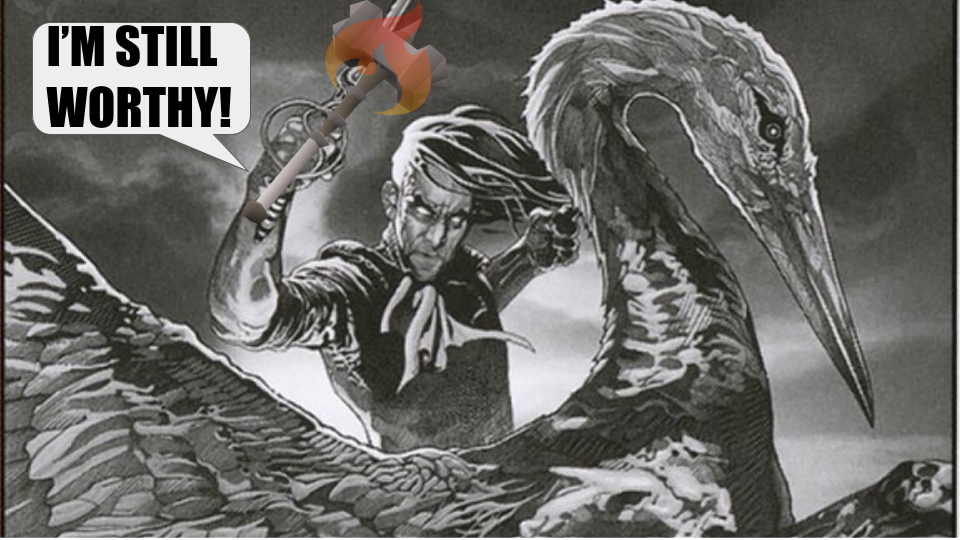 Hi there! I’m Jeremy Rowe, AKA J Ro, the Unsummoned Skull, a former Judge, Tournament Organizer, and Pro Tour competitor. I’m also a current teacher, college professor, streamer, community leader, and content creator. In this series, we examine the big EDH questions: What makes a card good? What’s the difference between popularity and synergy? What even is that synergy thing anyways? My intention is to differentiate between high- and low-synergy cards, describe in what ways the cards work with the commander, and explain why high synergy is such a good thing. For a deck to be powerful and consistent, each card needs to do a job, and these cards do WORK!

It’s not often that the reveal of a card in preview season piques my interest, let alone actually makes me overjoyed. I remember literally crying tears of joy when one such card was revealed, a commander that I’d given up hope of ever seeing: the perfect Boros spellslinger commander.

Now, it's true that Firesong and Sunspeaker exist, but they are heavily overcosted and require you to play burn spells after a six-drop commander is already in play. They are easily targetable and do not wear Sunforger well. Strixhaven came and went, and, while Lorehold was amazing, it focused more strongly on artifacts, Spirits, and things coming and going from the graveyard. Additionally, a bunch of those commanders cost 4+ mana.

Then, along came our brilliant (red and) White Knight: Rem Karolus, Stalwart Slayer. Rem was the first commander that felt like it was designed with me in mind. He comes down quickly enough to dissuade attacks and provide the protection needed to make it to the mid-to-late-game, at which point the noncombat ability can factor in. Rem adds a point of damage to instants and sorceries that damage opponents or their creatures or planeswalkers, working perfectly with burn and damage-based board wipes, and triggering separately off of each spell or copy, making him a solid Storm commander, too!

Boros Burn is an impressive strategy, having been incorporated successfully into Modern and Legacy with good old-fashioned Lightning Bolt and Boros Charm, but can the strategy work with three opponents and 40 life? Sometimes, you have to be creative; I’ve used Sunforger with Rem’s natural stats to commander damage a player before!

It is my belief that all Commander decks are midrange decks, needing the same jobs done in order to switch cleanly between offense and defense, as well as to combat a variety of threats from around the table. Rem Karolus, Stalwart Slayer is a special commander, so let’s find the right tools for these jobs!

Most decks need ramp to play high-impact spells at a time when they are still relevant. Rem has a relatively low mana value, so the mana bump needs to happen after he is in play, to help propel the game past the early cardboard trades and into the bigger, splashier plays.

For each job, I'd like to highlight a low-synergy-score card, a high-synergy-score card, and an underrated card for this commander, to add more context to the qualitative data and see how each one magnifies the abilities, accentuates the strengths, and mitigates the weaknesses of our commander.

Mana Geyser provides a huge boost in mana, setting us up for one enormous turn to cast many more spells. Almost half of Rem decks run it, but few other Boros decks do, likely due to the difficulty of creating a spellslinger deck in these colors. This is shown by the fact that only 5% of other red-white decks play this card, highlight how unique our commander is compared to his contemporaries.

Storm-Kiln Artist creates a Treasure token each time we cast an instant or sorcery, enabling the deck to keep churning and play multiple burn spells in a turn. Until the Treasures get popped, they increase the Artist’s power, often forcing enemies to look elsewhere whenever they want to attack.

Neheb, the Eternal might not seem like a rock or a ritual, but he adds a red mana for each life lost by an opponent at the beginning of our postcombat main phase, which includes our burn! Suddenly our burn spells, especially those that hit multiple opponents, become massive rituals and enable more gigantic plays!

In addition to being able to cast spells on time (or early enough in the game to still be relevant), decks need removal to be able to deal with the threats opposing decks present, as well as to be able to protect their own threats from opposing removal. In Rem’s case, spot removal needs to at least be capable of dealing damage, although having non-conditional modes or removing permanent threats is also helpful. Then again, sometimes this deck is better served by the old adage, “The best removal is player removal!”

Rip Apart is a flexible sorcery that can destroy an artifact or enchantment or damage a creature or planeswalker, the latter of which can be assisted by Rem. The ability to destroy any of four different permanents for two mana, assisted by our commander, makes this a popular card for our deck, as well as a decent card for Boros decks in general!

Abrade is a nasty removal spell with a synergy score of 16% for our Knight; it's used much more with him than with other Boros commanders. Being able to destroy an artifact, which has gained juicy targets after the return to Kamigawa, or smack a creature for damage that would be magnified by our commander, is big game.

Char gives chills to those who grew up dreaming of the Pro Tour, a spell that's famous for preceding one of the greatest top decks of all time in Pro Tour Honolulu. Char abuses a subtle aspect of our commander, the effect that prevents any damage dealt to us by spells, regardless of who owns the spell, so we won't take the backlash!

Most decks need plans for what to do if things get out of hand, and Rem Karolus, Stalwart Slayer is no different. Just as Rem wants damaging spells to amplify, we want our mass removal to scorch the land, air, or both, while still lowering life totals!

Blasphemous Act is a powerful scatterblast that wipes wide boards while leaving our permanents alone. It's fairly commonly used in red decks as a one-mana board wipe enables the caster to rebuild first after wiping the board, but it’s even better when our commander protects our stuff! (Unfortunately, since the damage is prevented, it does mean that Rem is not a good Stuffy Doll commander.)

Volcanic Fallout, meanwhile, has a synergy score of 31%, as it's fairly unique to Rem decks. While its original job was to melt Faeries, our deck is well-served by an instant-speed, uncounterable, damage-based burn spell that is empowered by our commander, avoids our own board, and can be found by Sunforger!

Ghostly Prison is another way to counter decks that go wide. These types of attack tax effects are particularly solid when we can remove singular threats, such as by using unconditional removal, like Path to Exile and Swords to Plowshares, (both of which can again be searched out with Sunforger).

Every deck needs card draw, selection, tutoring, or advantage, to help find the pieces it needs to transition between the phases of the game. There are always going to be spells that are better early than late, or better from ahead, or better from behind. Rem Karolus, Stalwart Slayer is a commander designed to accelerate into big, splashy, game-ending spells. Red and white have traditionally struggled to draw cards and amass advantage, but red has been given significant support and white has been given some interesting but inconsistent printings.

Jeska’s Will is one of the best new spells to come out of Commander Legends, combining red’s impulse draw with a conditional ritual. With the ramp in the deck being mostly ritual-based, rather than mana-rock-based, hiding ramp in card draw is particularly useful, although many other Boros decks run the card too. So it may not be unique to our deck, but that's just because it's powerful!

Light Up the Stage is another impulse-based draw effect, but one that is fairly unique to our commander. Only 2% of non-Rem Boros decks run it, while 25% of Rem decks do. This is likely because Rem, as a burn commander that is also hasty and evasive, is highly likely to get damage in to trigger the Spectacle cost reduction, which helps generate cheap bursts of advantage.

Faithless Looting is a repeatable draw effect, albeit one that provides selection rather than advantage. Burn decks in Commander tend to struggle with balance, as they need spells that go to the face, but also need spells to keep the board under control, especially since they don’t often develop their own board very much. We need effects that can filter away cards we don’t need and find the pieces we do need. Other decks may be able to make better use of filling the graveyard, but we need this effect just as much as they do!

The last major job that most decks need is a way to actually close out the game. Ramping allows you to play spells out, but can be dead draws late game. Removing threats works for a while, but with three opponents, someone’s going to stick something, and games can either stall out or develop into arms races. Card draw helps, but what are you looking to actually draw? The answer is... win conditions!

Boros Charm is a tremendous modal spell to include in a burn deck. A staple of Modern Boros Burn, it burns a player or planeswalker, which Rem can amplify, gives permanents we control indestructible, which can protect Rem, or gives a creature double strike, which can enable Rem to commander damage a player. All of that, and it can be found by Sunforger!

Price of Progress is a massive beating for the entire table… except us! With Rem, we're protected, but each other player takes damage equal to twice the number of nonbasic lands they control (which wouldn’t hit us for much anyways)!

Sunforger is a classic card, one of the main reasons to play red and white in Commander, as it operates as a toolbox card. It's my personal opinion that Rem makes better use out of this artifact than most other decks that include red and white. He was born to wield this weapon. It finds burn. It finds spot removal. It finds mass removal. It finds card draw. It finds anything and everything the deck needs. It even adds power to our fast, flying commander!

The Heat of the Moment!

Let's round it out with a sample Rem decklist! We're focusing on doing the jobs a deck needs to function, in a way that capitalizes on the commander’s unique characteristics. It’s time to set the world on fire!

Hopefully this guide helps you to evaluate cards and use the data at hand! Results may vary, as playgroups, deck choices, and the luck of the draw can impact how games go. Which cards overperformed for you? Which cards were overrated? Join me next time as we explore which cards are dead weight, and which cards do WORK!