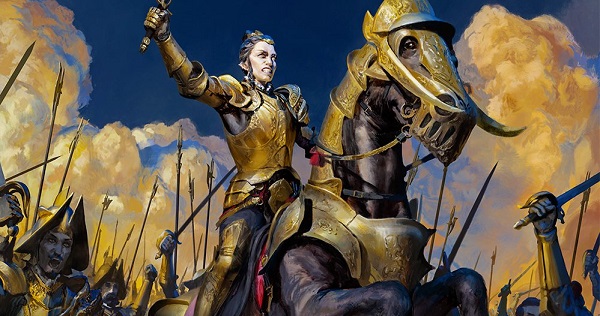 Welcome to Too-Specific Top 10, where if there isn’t a category to rank our pet card at the top of, we’ll just make one up! (Did you know that Search Party Captain is the only officer that lets you draw a card upon entering the battlefield?)

Sometimes you just get a silly idea, and it's better to run with it than ask questions.

For those unaware, typical militaries are split into two main groups: officers and enlisted. Much like Star Trek,our beloved gam e Magic has more or less eschewed the enlisted, all but ignoring their existence. Following in the footsteps of Hollywood, however, Magic's officers have been not only well represented but bordering on glorified.

So why not take a look at the leaders of the multiverse's militaries today?

Criteria: Creatures whose name denotes them as a form of specific officer, specifically Ensign, Commander, Captain, Commodore, Lieutenant, Major, Colonel, or General. As is tradition, all results are ordered by EDHREC score.

Everyone's favorite retired Shrines commander is still putting up some impressive numbers, because, you guessed it, a lot of Shrines players never made the switch to Go-Shintai of Life's Origin, which probably has a lot to do with Go-Shintai not being as strong a commander for the theme, even though it has the word "Shrine" on it in multiple locations. Being able to return a Shrine from the graveyard to the battlefield is great, but a full WUBRG in the cost is clunky, to say the least. The bigger deal by far is the ability to make 1/1 Shrine tokens, quickly making game-ending Shrines, like Honden of Infinite Rage, Sanctum of Stone Fangs, and Sanctum of Fruitful Harvest, go ludicrous speed.

But that's only if you have them, which Go-Shintai of Life's Origin cannot always guarantee, but Sisay, Weatherlight Captain can. In fact, Sisay can even go get Go-Shintai, the ultimate power move.

In short, if your only concern is making the best deck (rather than the less consistent and therefore more varied build), then Sisay is your captain.

For those gearing up for Dominaria United who may not have played much of the Limited format of Dominaria, a word of advice: brush up on just how good/annoying first strike is. If you're looking for a good way to do that, throw a Stromkirk Captain in your local Vampire deck and watch how fast people rethink combat. Even better, with Stromkirk Captain being an uncommon, it can command your Pauper EDH Vampire build!

Four-mana Monarch cards aren't usually anything to write home about, but when they also rattlesnake people who would attack you to grab the crown.

In short, if your aggro-esque red deck needs some card advantage, this is worth thinking about.

Now, can we move on to the important bit where there's a flaming Djinn in charge of a wooden boat?

The second captain of the Weatherlight on our list, Jhoira, Weatherlight Captain is perhaps the simplest of the Izzet artifact commanders, which is why I think we see less of her in the command zone than we do the 99: brewers like complexity.

With that said, if you're looking to set sail with Jhoira, might I suggest that there are now enough Sagas in Izzet to make that a fun challenge?

I should salute more Squirrels.

Chatterfang, Squirrel General is funny at first look, but the more you look over the card the more you realized just how pushed it is. An evasive 3/3 for three that makes more tokens and sacrifices them to either pump itself or remove problems is a lot of boxes checked in one text box. Combine that with the fact that there hadn't really been any other Squirrel commanders prior to our Squirrel general, and it's no wonder that we're seeing Chatterfang in charge of over 6,000 decks.

Our #5 inclusion barely beats out the Squirrel general, on the basis of its use in the 99, rather than in the command zone. Captain Lannery Storm creates Treasures just by attacking (including the turn you play her) and can swing for large sums of damage late in the game if you've accrued tons of Treasures. It's a pirate's life for her, and for me!

The original red token-generator, Siege-Gang Commander has been at it longer than any creature besides Deranged Hermit, but even the Hermit doesn't throw their Squirrels at the opponent for damage! Siege-Gang is the perfect answer for any kind of token or Goblin deck, doing everything you need to push a game to its conclusion, all in one card. Where I really love this guy, though? Jeskai blink decks. All the tokens, all the enter-the-battlefield triggers, and a sac outlet to close the game out if needed? Yes, please!

If you thought Stromkirk Captain had it all put together, might I introduce perhaps the best Zombie lord of them all, Diregraf Captain? A Blood Artist and a Glorious Anthem in one, with deathtouch slapped on for good luck, Diregraf Captain can take a Zombie deck from 'annoying' to a must-solve problem just by hitting the battlefield. Heaven knows how they passed their orienteering course with half their brains sticking out of their head, though.

Any officer worth their salt knows that you have to hit the ground running, and Ranger-Captain of Eos does just that by bringing along his hand-picked aide. He then frequently shuffles off to start some bureaucratic paperwork, leaving the aide more or less in charge, never to be seen again. It's a management style, that much is for sure.

If you're looking for the general to lead them all, then look no farther than Liliana herself, under the watchful eye of her commander, Nicol Bolas, God-Pharaoh. It just goes to show, no matter how far you work up the totem pole, there's always a murderous planeswalking Elder Dragon who's scooped up the top spot.

Speaking of whose really in charge, finding out which officers people are playing the most of is all right and proper, but does it really tell us what the hierarchy is?

For that, why don't we find out which officers can order the others around?

For those not from a military background, there are generally three tiers of officers: Junior, Field-grade, and General. This is true not only currently, but also going back to the early 1900s, and is fairly standard across the entire world. In other words, we have some easy dividing lines to figure out who's actually in charge here! (Still, let's organize equivalent ranks by EDHREC score, just so we know who has bragging rights in addition to ordering-around rights.)

The cream of the crop, the geniuses in charge, the strategic masterminds behind it all. Generals are almost mythological in their military stature, which makes sense when you consider that one of the most prominent among them is apparently a Squirrel.

The mid-level management of the world's militaries, field officers oscillate rapidly between people that just want to do good for their troops and power-hungry megalomaniacs that you hope never actually manage to finish climbing the rungs.

Colonels, Captains-on-Boats, and Commodores (Commodores may technically be General Officers if they're senior, but would still be the lowest rank of Admiral, so....)

The greenhorns who don't know anything and yet are in charge of it. Sure, by the time they make Captain, they may know which way to stick the pointy end, but even then you'd be astounded how often you're scared for your life upon having your first real conversation with your commanding officer. In other words, there's a reason there's a fantasy trope of squad captains getting killed by their own troops. Let's, uh, stress the word "fantasy" there, shall we?

So, if you were wondering who the lowest-ranking, least clout-having officer in all of the multiverse was, it is none other than Icatian Lieutenant. Poor guy, all he wants to do is help out his fellow Soldiers, and he gets nothing but snide remarks from everyone both above and below.

Finally, whose your favorite CO? Do they outrank you?

Let us know in the comments, and we'll see you at the officer's club table, for what we'll tell people later is a classy game of EDH.