Drawn Together - In Search of Artist Tribal 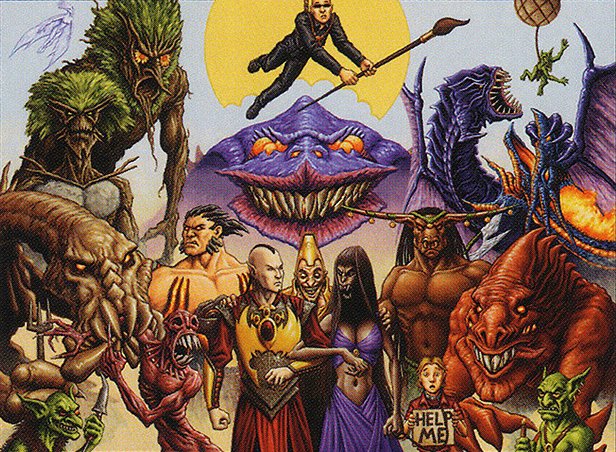 (Drawn Together | Art by Pete Venters)

A Work of Art

One of the most useful parts of EDHREC are the lists of tribal commanders, decks, and cards, which are so useful for finding interesting creature type synergies and cards you may have forgotten about.

Of course, there are also decks built around mechanics in a similar way, such as "flying tribal" and "deathtouch tribal". Though these decks don't focus on creature types in the same way, they feature cards bearing specific mechanics and try to take advantage of what those mechanics do, as well as other cards that specifically mention those mechanics (e.g., menace, trample, vigilance).

Less common are so-called "Artist Tribal" decks: those that exclusively or heavily feature cards with art by a specific Magic: the Gathering artist. These decks aren't necessarily mechanically synergistic; their primary purpose is typically to celebrate the work of a specific illustrator. Lately, I've been really interested in the art of Magic, and those who create it. 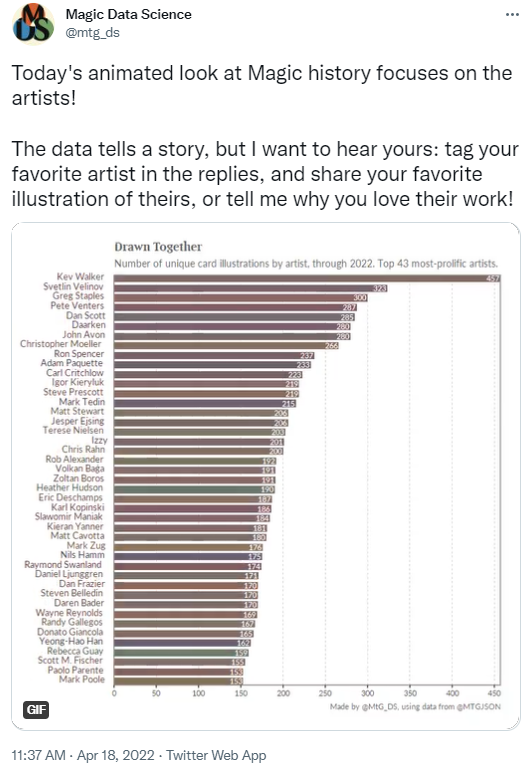 Thus, I decided to look for Artist Tribal decks in the EDHREC database!

My process was straightforward, though fairly computationally expensive: I looked through a large sample of the over 1,000,000 decks represented on EDHREC and identified the artist(s) responsible for the illustrations of each card therein.1 I decided that any deck running at least 50 unique nonbasic lands with art by a single artist was probably trying to be themed around that artist. Here are some of the most popular illustrators to build a deck around:

In recognition of the talent of these artists and the creativity of the deckbuilders responsible for these decks, below is an "art gallery" of sorts, featuring the individual illustrations that appear most frequently in these theme decks.

I find that scrolling through this gallery gives an excellent sense of the nature and breadth of each artists' ouvre.

Some ideas for your next artist-themed deck

Want some ideas for some good commander/artist combinations you could build? I went back into the EDHREC database to find the commanders who run the highest proportion of illustrations from a single artist.

Here are some seeds of decks to get you started, if there's a particular artist you would like to start building around. Note that the on-hover tooltip image of a card may not display the version of the card illustrated by the relevant artist - but when you order your cards, you should be able to specify a version that has your preferred illustration.

Some of these are pretty on-the-nose: Johannes Voss was commissioned to illustrate many of the Shrines, which are suitable for a Shrine commander. The Asmira/Rebecca Guay combination is appealing because Guay actually illustrated Asmira herself!

Magic clearly would not be the game it is without the incredible illustrations that grace each card, and I just wanted to express my appreciation for the many talented artists that have contributed to the game in this way.

1 Note that EDHREC only stores card names, not the specific version of each card. Many cards have been printed multiple times with different art, so I'm making the assumption that decks which run many other pieces of art by a given artist are choosing the reprint also illustrated by that artist.