The Toolbox - Sundial of the Infinite 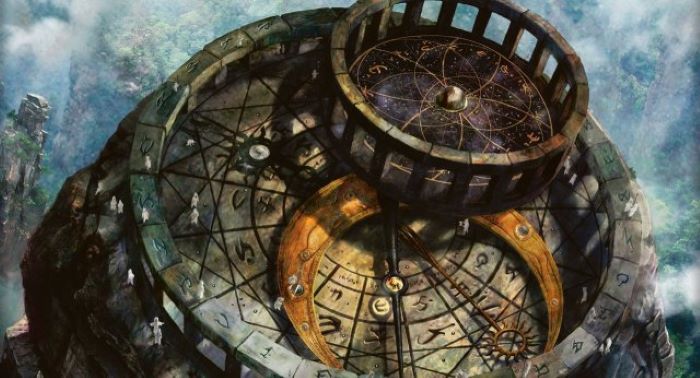 (Sundial of the Infinite | Art by Vincent Proce)

The Hunt for Red October

Welcome back to The Toolbox! Here, we take a look at underplayed cards and evaluate where they ought to see more play. Today we’re taking a look at an overlooked card that I think should see much more play in Commander: Sundial of the Infinite!

This is one of those cards that whenever it hits the table there's a large red flag that tomfoolery is about to ensue. Sundial is probably the most "out there" card that I've covered, and in all likelihood I never would have covered Sundial if our Community Content Manager, Jason Alt, had not pointed it out. While Sundial doesn't end games on its own, it will end turns. Well, your turns specifically. This is probably the point where you think that I'm nuts for recommending that you play this card, so let's get into it!

Looking at the EDHREC page for Sundial of the Infinite, we see that the top commander is Phage the Untouchable. Phage is a force to be reckoned with on the field, one-shotting creatures and players alike. The drawback is that if she enters the battlefield and you didn't cast her from your hand, you lose the game. This is where Sundial of the Infinite comes into play: when the trigger to make you lose goes on the stack, activating Sundial will end the turn, exiling the trigger, and saving you.

Then there's Zirilan of the Claw, who may not seem as obvious of a choice at first. This is one of the times that reading the card doesn't actually explain the card; specifically, the part that says, "Remove the creature from the game at end of any turn." has been erratad to say, "Exile it at the beginning of the next end step.", similar to Kiki-Jiki, Mirror Breaker. This means there's a delayed trigger to exile the Dragon you tutored for at the next end step. Once this trigger goes on the stack, however, you can respond to it by activating Sundial of the Infinite to exile the trigger and keep your Dragon!

Finally, there's the Sneak Attack on a stick, himself, Purphoros, Bronze-Blooded! His ability to drop creatures into play also has a delayed trigger that can be counteracted with Sundial. Having Sundial with Purphoros out basically turns him into a repeatable, haste-giving, one-sided Show and Tell, so it's pretty easy to see why it's a regular inclusion there!

Now that we've taken a look at where Sundial of the Infinite is most commonly played, let's get into where it should be played more!

Inalla, Archmage Ritualist made waves with her sheer value of doubling enter-the-battlefield triggers and by effectively being a one-card combo with Wanderwine Prophets. Hate her or love her, you can't deny the power she has. So why would a deck like this want a card like Sundial of the Infinite?

The short answer is that she also happens to have the same kind of delayed trigger as Purphoros, Bronze-Blooded and Zirilan of the Claw. This means that Sundial of the Infinite turns Inalla into a Grixis Bramble Sovereign that gives haste! There is a reason that Bramble Sovereign is played in over 4,000 decks.

Imagine getting Sovereign's ability but with Grixis enter-the-battlefield triggers; that's the value being ignored here. Every Bloodline Necromancer, Archaeomancer, and Puppeteer Clique could be doubled. There's also the fact that the Wizard Tribal Inalla decks tends to run other copy effects, like Naban, Dean of Iteration and Molten Echoes, to make this interaction even more insane! I think all of this makes it well worth the inclusion in Inalla, but I'd love to hear your thoughts in the comments below.

Neyith of the Dire Hunt is gonna be the hot contender of this article, and for good reason. First off, I know that Jumpstart has had a very limited release at this time, and hope that that changes. Secondly, the set has only been out for about three months, and in the middle of a pandemic, so there has been less time to actually play with the new commanders.

That being said, she does have the second most decks out of any of the Jumpstart commanders, just behind Tinybones, Trinket Thief so I think I am somewhat justifed. The idea behind including her in the article was given to me by our new writer, Jaelyn, whose article on Rhystic Study you should definitely read, and I thought it was too good not to include. So let's get into it!

Neyith is a commander that relies on fighting and combat to act as a card draw engine. Incidentally, this gives a lot of instant-speed play with cards like Inscription of Abundance, Return of the Wildspeaker, and Ancient Animus acting as combat tricks. Now let's get into why I think Sundial of the Infinite is a good consideration.

Having Sundial let's you swing in with impunity with no risk of losing your creatures to blockers, which means getting in for damage or forcing people to block, and drawing cards off of Neyith. This gives you the opportunity to either draw something like Return of the Wildspeaker that can upset the blocks, or just activate Sundial with no loss to the board.

This may seem minor, but as someone that has played a lot of aggressive decks, having a way to negate combat if needed that still lets you get your attack—or in this case block—triggers can be huge. Not everyone will agree with this pick, but I thought that it would be an interesting one to analyze and discuss with you in the comments!

No, Not Razor Burn - Raze-Boar!

Ilharg, the Raze-Boar is one of my favorite commanders from the last couple of years as a big red dummy that just wants to turn sideways. Purphoros, Bronze-Blooded may be a bit closer to an actual Sneak Attack, but I think that there is still good reason for choosing Ilharg. Why would the Raze-Boar, himself, want a card like Sundial of the Infinite, though?

Keeping with the trend, Ilharg, the Raze-Boar does have a delayed trigger of bouncing back to your hand the creature that he cheated. This once again interacts profitably with Sundial of the Infinite to prevent the bounce-to-hand trigger. I can hear the keyboards clicking telling me how the bounce trigger interacts well with cards like Fanatic of Mogis, and I promise I'm getting to that.

This allows you to cheat in the giant threats early, like Terror of the Peaks, Avatar of Slaughter, and Balefire Dragon, to apply pressure early while disrupting your opponents' gameplans. This also frees up your mana to be spent on valuable noncreature threats like Fiery Emancipation, Flameshadow Conjuring, and Embercleave, then gaining inevitability with the constant damage from cards like Fanatic of Mogis and Spawn of Thraxes!

There is also a bit of a trick to protecting important bounce creatures from blockers. By activating Sundial of the Infinite before damage is dealt, it can protect your Fanatic of Mogis from the blocker and just get bounced at the beginning of the next end step. This makes it free to attack into otherwise bad blocks, dealing more damage to your opponents.

At this point if you don't agree, there's not much more that I can say aside from telling you to take a look at the decklist!

I know that a lot of college students are in the middle of midterms or just getting out of them, so good luck! Thank you all once again, and I hope that you have an amazing week.