Too-Specific Top 10 - We Are Legion 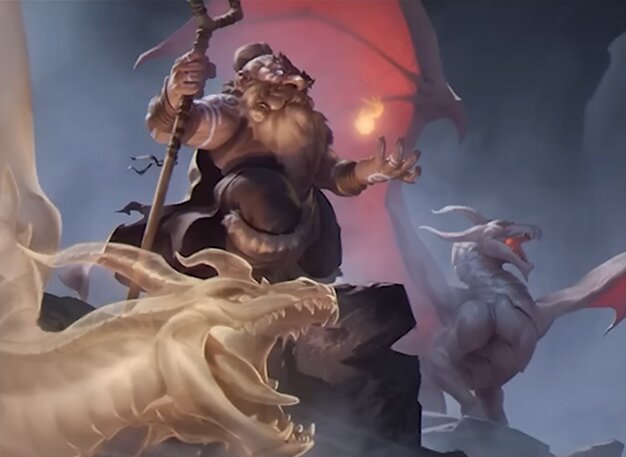 The Boros Token Legion, That Is

Welcome to Too-Specific Top 10, where if there isn’t a category to rank our pet card at the top of, we’ll just make one up! (Did you know that Mirrorpool is the only non-blue-color-identity land that can copy a creature?)

I know, I know, everyone's moved on to Warhammer 40,000 and Unfinity spoilers already. Well, too bad, never-ending spoiler season! I have cards that still haven't come out yet that I still want to talk about, even if they're already horribly outdated!

Cadric, Soul Kindler is another Boros commander that breaks the "combat only" glass ceiling, ever-broadening the horizons of red and white. In this circumstance, he cares about legends, so much so that he makes them not legends, and then makes them not special by making copies of them!

Now, we could just lay down a horde of Boros legends and call it a day, but why settle for just two copies of all of your legends?

The immediate list that jumps to mind when you think of making legendary copies of your legendary copies is "Top 10 Legends That Create Copies", but there actually aren't very many of them:

All of these options make great backup commanders, and we'll have backups to the backups of the backup if we have Cadric in play. In other words, several of them more than make the cut. If we're going to go deep on copies, however, we're going to need more than just the obvious legendary inclusions, so why not look at the unique options that our commander makes possible?

Six mana is a lot, but with a little luck, it will make a lot of tokens! Mirror March can swing a whole game, no matter your feelings about Krark's Thumb, not to mention the nonsense it can get into with creatures like Delina that have an attack or combat damage trigger. That said, six mana is a lot to pay to very possibly get no effect even after your first trigger. Combine that with the fact that we need to leave space for a ton of legendary creatures to copy with our copy effects, and I'm not so sure that Mirror March makes the cut, despite making the list.

Heat Shimmer, on the other hand, is just what the doctor ordered: a cheap copy effect that will let us make even more copies of our legends with effects so powerful that we were never supposed to have more than one of them.

Flameshadow Conjuring is expensive enough that it's been cut from more than a few of my builds, but for Cadric, specifically, it seems like a slam-dunk. Taking a turn off from casting legends to spend four mana on an enchantment we don't get to copy will be a little rough, but Flameshadow Conjuring will be exactly what we need for the inevitable board wipes that usually spell doom for a Boros deck, especially since the first thing we'll be copying with it will be the recast of our commander.

We're clearly not settling for just double the copies, so why don't we go a bit further down that line of thinking with Blade of Selves? Myriad does get a bit worse in the late game, but prior to that, there's no question that getting three copies of an attacking legend could pack quite the punch.

Trying to combine a 'legends matter' theme with a tribal theme could be a tall order, but there's certainly no shortage of popular creature types in Boros that you might be able to build around, from Humans to Soldiers to Goblins to Cadric's own types, Dwarf and Wizard. What really intrigues me with both Molten Echoes and our commander, however, is the prospect of blink shenanigans with their enter-the-battlefield abilities.

Then again, now we're talking about a Legendary Dwarf Tribal Blink deck, which seems like a few steps too far.

Instead of all that, I think it's much more feasible to go as deep on Populate effects as we can. While normally this would be a terrible idea with legends, we're already taking the risk by making copies of copies of legends, so why not go even further?

While there are some Populate cards that are a little rich for my blood (specifically you, Song of the Worldsoul), Ghired's Belligerence, Determined Iteration, and Wake the Reflections all seem like natural extensions of what we're already trying to do. The cream does really rise to the top, too: Rootborn Defenses is by far the best of these effects, given that it can be cast at instant speed and can provide much-needed protection for our commander.

Twinflame is even cheaper than Heat Shimmer, and it can copy multiple creatures in the late game. Put simply, there's no way that it's not the best card in our deck, especially since it's cheap enough to make another copy of our commander before we then cast another legend to copy it twice for a heck of a combat step.

Mimic Vat has been a staple of Commander since the days where it was only called EDH, but it's always had to tiptoe around the legendary rule. With Cadric, that will plague us no more! Most importantly, Mimic Vat provides a much-needed answer to what we do when our commander starts becoming prohibitively expensive, although it must be noted that if you decide to exile your commander under the Vat, there's no getting him back if Mimic Vat gets removed!

Four mana to copy a creature spell on the stack has always been a lot, but luckily, copying Cadric's triggered ability is much cheaper. At least, it appears it is, until you start remembering that it also costs an additional mana for each activation.

Still, there's no doubting that this is going to be a mana-hungry deck in the first place, so Lithoform Engine might just be good enough to make the cut, depending on how deep the well is for legends that make a ton of mana:

I'm actually pleasantly surprised by the number of cheaper legendary options that could end up stocking us up on mana sources, especially Ragavan, Nimble Pilferer and Magda, Brazen Outlaw. Sure, they're just precursors to when we really get going with Neheb, but they give me hope that we might just be able to pull off having enough mana to make Lithoform Engine not entirely a dead card. Only playtesting will tell, though!

1. Feldon of the Third Path

Speaking of mana-intensive options, Feldon of the Third Path's activated ability is not only a tad too expensive for what we're trying to do, it also doesn't really fit with the deck very well. Casting and copying a bunch of legends that give us a bunch of mana so we can cast and copy more legends is a flow I can get behind, and putting those original legends in the graveyard is not part of that flow. As good as the normal Feldon of the Third Path deck is, it focuses in an entirely different, almost Reanimator direction. That's all well and fine, and it's good enough for 32,000 inclusions, but it's not what we're trying to do here.

Speaking of which, let's actualize all these things we've been discussing!

The balance of legends versus copiers feels about right in this build, although I would definitely point out that this is a first draft kind of build with little to no interaction, just testing if the deck doing what it's trying to do is feasible, and through goldfishing, it does feel pretty great at doing what it wants to do, with a fair amount of ramp to get you straight to copying!

As for the inclusions in the deck that didn't make the list, there aren't many that we haven't gone over. There is one huge elephant in the room, however:

Splinter Twin has always been a combo machine, but here it's less of that and more of a multiplier, allowing us to get easy copies of our commander or a particularly impactful legend. Sure, we could also throw in a Village Bell-Ringer or a Goblin Sharpshooter to go infinite, but honestly, it probably just isn't necessary.

Finally, there's a category of legends we haven't covered yet that many of you might overlook while brewing up Cadric, Soul Kindler: Legendary tokens.

We didn't quite make it to 10 on this, but there are still some decent options you may want to pursue in your more particular Cadric build. Dark Depths is scary enough with Thespian's Stage when you do it once, but it wouldn't take much to set up that particular combo multiple times with any number of Brought Backs and Sevinne's Reclamations. Even easier to loop, however, is Tuktuk the Explorer, whose token copy will enter the battlefield with a death trigger already attached to get you a 5/5.

With Cadric's printing, we are now on our third Mirror Gallery effect, although this is the first one that's been printed into the command zone. How do you feel about it?

Finally, what is your favorite Boros legend? Are you excited about the prospect of having more than one copy of it? Do you think going full copies with Cadric is more interesting than just another legendary tribal deck?

Let us know in the comments, and we'll see you at the studio recreation of the Round Table from the motion picture First Knight.