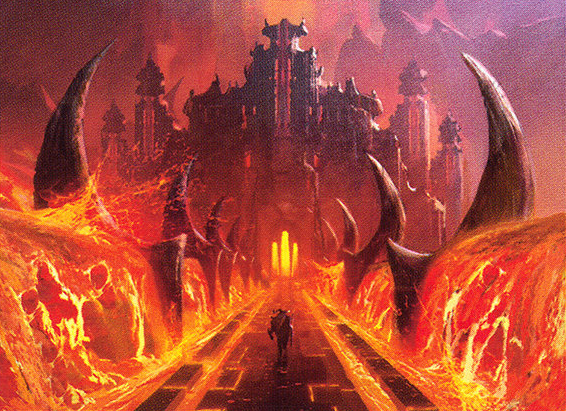 Barring decks with black and green in their color identity, the Command Zone found in their gameplay survey that decks with black and red in their color identity were the strongest. Although this extends to color combinations like Jund and Mardu, does this color pairing advantage translate to Rakdos? In this new installment of the Pursuit of Knowledge series, we will delve into the world of Rakdos. We will attempt to identify the cards that stand out in the black and red colors, create template of cards in different categories that can be reused to build other Rakdos decks, and use these templates to build a Rakdos commander deck. Card ranking, based on the Command Zone gameplay data, will be our first criteria to select the cards for our deck, but we will also take into account card synergy, card type distribution, and consider the mana curve to create a well-rounded deck.

There are 27 Rakdos commanders available at time of writing. The Rakdos guild does not have a solid front-runner like Golgari's Meren of Clan Nel Toth with her 3,548 decks. Instead, Rakdos carries a number of less popular commanders, like Rakdos, Lord of Riots (1,437 decks), Olivia Voldaren (963 decks), and Mogis, God of Slaughter (840 decks).

Looking at the Command Zone gameplay data, I realized that Rakdos is not as focused as Golgari. The graveyard is a central theme for most Golgari commanders, while the major Rakdos commanders seem to implement a mixture of different strategies. They can be aggressive at times, promote pain in some instances, be more focused on control, or make use of the graveyard. What can we say about Olivia? She represents one of the oldest archetype of Magic: pure control. She somehow blends Control Magic, Conspiracy and Gelectrode.

We will tailor our deck similar to the average EDHREC Olivia Voldaren Vampire tribal deck, with a distribution that resembles the one below. Although it is typical in an Olivia Voldaren build to fully go tribal, I'd like to diversify a little bit to put more emphasis on the control aspect of her persona. In addition to the general categories presented in my previous article (ramp, card advantage, disruption, and mass removal), I will create a Vampire tribal category for the sake of this article, because, as you will later see, the best Vampires support Olivia's mission. I will also introduce a new category: Control.

Lets have a look at each of these categories. The shaded cells in the various tables are the cards that will make their way into our deck. The rank of each card will also be highlighted in the tables below.

In a Rakdos environment, we do not have access to any of the good ramp cards that green provides. We need to rely a lot more on mana rocks.

The main challenge with Olivia will be to give her access to the mana required to steal our opponents' creatures. Seven mana is an expensive proposition. In most decks, there are only a handful of creature that cost seven mana or more. Paying a total of seven mana with Olivia to steal someone's three-drop creature is not that efficient. If we want to stay ahead of the curve, we will need to find ways to either cheat the cost of Olivia's abilities, or build our mana pool in such way that we have an edge over our opponents in that respect.

For these reasons, our mana base is designed to generate tons of mana. Cards like Cabal Coffers, Everflowing Chalice, Black Market, Braid of Fire, and Mana Geyser have the potential to give us the mana boost to progress our board state while crippling our opponents' best resources. Access to a large mana base also allows us to play big X spells like Torment of Hailfire, Comet Storm, and Magamquake with a potentially significant impact in the game.

A number of creatures will have abilities that can convert mana for value at instant speed. This will ensure our mana advantage does not go to waste.

I normally like to have access to ten card advantage/tutor effects to reduce my chances to be empty-handed in the context of the game. In this deck, however, there are other ways to get card advantage: through Olvia's abilities, through reanimation, and through our creatures' ETB effects. I have been lighter on card advantage/filtering for the deck list.

Phyrexian Reclamation allows us to recur our creatures. Liliana Vess can either be used as a tutor or to slowly drain the cards from our opponents' hand. Her ultimate fits well with this deck. Damnable Pact can either fill our hand with cards or could be used to drain life from one of our opponents.

This category encompasses cards used for target removal or disrupting your opponents' plans. Five to eight cards should be secured from this category to give you a chance to react to threats that impedes your plan.

Liliana of the Dark Realms can be handy to get rid of indestructible creatures, but can also be used to buff one of your creatures. Her ability to search for Swamp cards could prove to be useful to ensure you never miss a land drop, and her ultimate would provide a big boost of mana for the rest of the game. Ingot Chewer is one of the cheapest artifact removal cards in the format and has potential to be abused through flickering and reanimation. We can also repeatedly remove the most tenacious creatures with Dark Impostor.

Given the control aspect of the deck, I have chosen to only include one creature removal and one permanent removal spell at instant speed.

Mass removal is important in a control deck to slow down our opponents' while we establish our board position.

Red provides its own list of removal, and one that complements our decklist well. Molten Disaster and Magmaquake deal damage to non-flying creatures. Since a good portion of our creatures can fly, including our commander, this effect on our side of the board will not be as dramatic.

The control category contains cards that supplement Olivia's strategy of stealing our opponents' permanents. This sort of redundancy removes a lot of stress from the commander to perform the core strategy.

With Grave Betrayal, Drana, Kalastria Bloodchief becomes Olivia's Splinter Twin. Not because of Splinter Twin's effect, but because Drana will effectively copy Olivia's plan to bite all creatures and bring them under our control. Since Olivia brings our opponents' creatures back as Vampires, Captivating Vampire's requirement to have five Vampires on board to take control of other players' creatures should not be too hard to achieve. Olivia's ping ability can also be used to turn our own non-Vampire creatures into Vampires if need be.

The core of our creatures will come form the Vampire tribe. These are some of the best ranked cards in the Command Zone gameplay Rakdos card pool. In addition, several Vampires in the list synergize with our strategy, either participating in the control aspect of the deck, or helping us ramp the mana.

Among the Vampires selected for the deck, we have a mixture of aristocrat, reanimation, and disruption strategies. Viscera Seer and Yahenni, Undying Partisan provide a sacrifice outlet that can be useful to get rid of creatures that would otherwise go back to their owners if Olivia dies. Sangromancer, Blood Artist, Malakir Bloodwitch, and Falkenrath Noble could help us stay afloat if we spend too much of our life total to pay for the costs of cards like Toxic Deluge or Phyrexian Reclamation.

The only creature that was added to the list that was not ranked is Stormkirk Captain. This lord probably has a rank similar to Metallic Mimic.

Standalone creature spells are creature spells that do not belong to any of the previous categories, that work on their own or in concert with the commander. Finally, Hellkite Tyrant expands control to artifacts.

Soul of New Phyrexia protects the board from removal.

Standalone spells are non-creature spells that do not belong to any of the previous categories, that work on their own or in concert with the commander.

When our opponent realize that we can steal their best creatures, Olivia will likely become a target. Cards like Soul of New Phyrexia, Cauldron of Souls, Nim Deathmantle, and Dread Return will be a good complement to Phyrexian Reclamation and Command Beacon to make Olivia and any of our other creatures more resilient to targeted or mass removal.

If a sacrifice outlet like Phyrexian Altar is available on board along with Cauldron of Souls, it will be possible to abuse one of the creatures with ETB effect. You could gradually bring back all creatures from your opponents' graveyard at no cost with a card like Sepulchral Primordial. Olivia can ping herself to remove the -1/-1 counter added to her from Persist.

One card that is not listed in the above table because it is ranked lower at rank 294, but which is still included in our deck, is Rings of Brighthearth. This card allows us to cheat the mana costs of our more expensive abilities, like Dark Impostor, Drana, Kalastria Bloodchief, or Olivia Voldaren.

For the land package, we select the top ranked lands (with the exception of most of the fetch lands, for budgetary reasons; they can be added if you have access to them). We replace Cinder Barrens with Canyon Slough, a better replacement, and we add Smoldering Marsh, which was not ranked in our land pool.

Command Beacon may be useful if Olivia becomes is a repeated target in the game. Mirrorpool may be converted into a creature that has an interesting ETB to take control of one of your opponents' permanents.

Using the best of the class, we are now ready to take over the world! Hopefully, the different tables presented in this article will help you build many more Rakdos decks. Next article, we will take a look at Simic. If you have some preference on the Simic commander to build around, leave a message in the comments section.